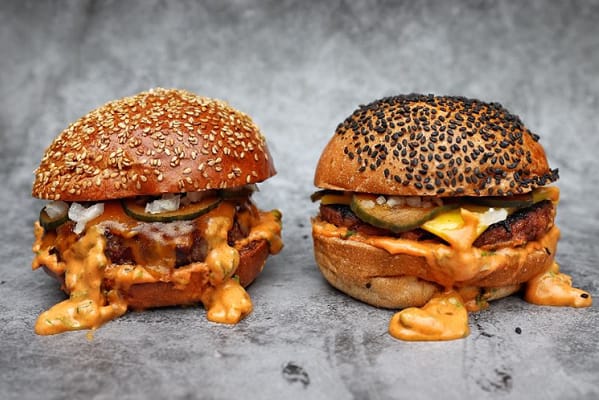 Filthy Buns will a brand new burger to celebrate National Burger Day on 27 August. ‘The McFilthy’ is a new limited-edition tribute to the mighty Big Mac – which comes in both meaty and vegan versions. The burger brand has taken the iconic Big Mac burger sauce and given it a filthy rich revamp to create a new secret sauce that honours the original.

Filthy Buns, who are based at The Three Compasses in Dalston, have become infamous in London for their outrageously tasty burgers made from top quality ingredients and exciting flavour combinations.

The McFilthy will be no different; diners are invited to choose from a juicy plant-based patty or, for meat eaters, a 45-day, dry-aged beef patty from The Ginger Pig. Layers of dripping vegan cheeze or melted Red Leicester are wrapped around lashings of the new secret Filthy Buns burger sauce, rounded off with house pickles, chopped white onions and American mustard.  Plant-based fans can rejoice as they can finally get their hands on a vegan alternative to the Big Mac.

The McFilthy will be available from Filthy Buns at The Three Compasses from 27th August for one month.  Priced at just £7* thanks to a 25% National Burger Day discount. (Usual menu price £9.30* for the remainder of the month of September). Furthermore, to celebrate the annual burger event, the entire Filthy Buns menu will also be available with a 25% discount on National Burger Day.

Filthy Buns has been serving up mouthwatering burgers at the Three Compasses in Dalston since September 2019. In February, founder John Gladwell saw nationwide demand for his burgers rocket after creating the ‘Millionaire’s Short Rib’, a 45-day dry aged beef patty topped with beer-braised short rib, swiss cheese, smokey gravy mayo, pickled shallots and  homemade Lotus Biscoffy peanut butter and crowned with a caramelised biscuit. Burger and biscoff fans travelled from the furthest corners of the UK and beyond to the East End pub just to try the burger.