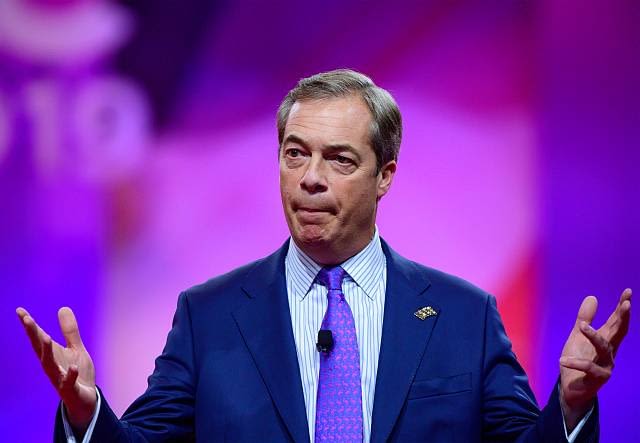 Farage expects Brexit Party will ‘sweep the board’ during EU elections

Nigel Farage has said that Labour and Tory politicians have underestimated the feeling among Brexit voters, as the rival parties are struggling to respond to the electoral threat Farage is posing.

Farage expects that his Brexit party will “sweep the board” during the European elections on 23 May. Farage claims voters are now backing him as they are deserting rivals, Jeremy Corbyn and Theresa May.

In response to Farage, Labour deputy leader Tom Watson is calling for his party to demand a second referendum rather than “sit on the fence” to defeat Farage’s Brexit party.

Speaking to the Press Association Farage said, “Westminster has just underestimated how the country feels about this.

“They thought they could get away with just kicking the can down the road endlessly, that people would just put up with it.

“I think a lot of people now who did vote Brexit now realise, with this Parliament, unless there is huge pressure put upon them it simply isn’t going to be delivered.”

He claims that his Brexit Party is “well ahead of 60,000” supporters who are registed and paying £25 each. He added, “I have just had my accountant on saying one is joining every 12 seconds.”

Farage said, “A lot of Conservatives are disgusted with what the party has done.

“But equally, if Tom Watson thinks that the Labour Party going for a second referendum is going to solve everything, I have got news for him because if you go to south Wales or the Midlands or the north of England you find Labour constituencies with big Leave majorities.

Watson said in an article to an Observer, “Labour won’t defeat Farage by being mealy-mouthed and sounding as if we half agree with him.

“We won’t beat him unless we can inspire the millions crying out for a different direction.

“We won’t win if we sit on the fence about the most crucial issue that has faced our country for a generation.”

Speaking to the Mirror newspaper Corbyn said, “Farage just says ‘let’s get out of Europe without a deal’.

“But I do think he has to be challenged. If you just walk away from Europe, the complications are immense.

“There’s a very integrated manufacturing process with us and Europe.

“Many of our factories rely on just-in-time deliveries from Europe and deliver to Europe on a just-in-time basis.

“If that is disrupted there are massive problems.”

An ORB poll for the Sunday Telegraph places the Conservative party 3 points behind Labour, on 26% compared to the Tories on 29%.

Farage’s Brexit Party holds a 14% share according to the ORB poll that interviewed 2,107 people.

Farage’s Brexit Party movement has sent strong shock waves through the Conservative party. 62% of the 1,132 Tory members surveyed said they will vote for Farage in the 23 May European contest.

The Mail on Sunday found that 40% are planning to back the Brexit Party and over half, 52% said they will vote Tory on the European contest on 23 May.