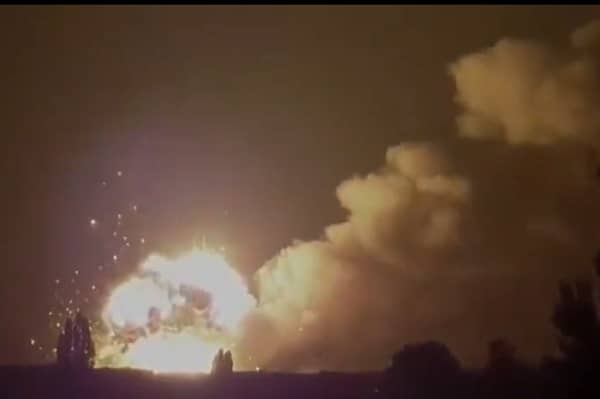 Ukrainian forces have struck deep inside Russia and soldiers are reportedly to have been killed in a drone attack.

Explosions rocked Engels military airbase hundreds of miles behind the frontline in the early hours of Monday morning.

Russian soldiers had shot down the Ukrainian drone and the wreckage from the drone landed on the Engels airbase in the Saratov region killing at least three.

Ukrainian news outlet RBC-Ukraine that two explosions where reportedly heard at the airbase in Saratov and then air raid sirens where heard in the area of Russia, which is around 450 miles southeast of Moscow.

A Russian defence ministry spokesman said on Monday, “A Ukrainian unmanned aerial vehicle was shot down at low altitude while approaching the Engels military airfield in the Saratov region

“As a result of the fall of the wreckage of the drone, three Russian servicemen of the technical staff who were at the airfield were fatally wounded.”

Additional footage of the strike pic.twitter.com/sG7rJvNIws

Saratov governor Roman Busargin wrote on Telegram, “There is absolutely no threat to residents…Civil infrastructure facilities were not damaged.

“Information about the incident at a military facility is being check by law enforcement agencies.”

The governor of Saratov, Roman Busargin wrote on Telegram, “There were no emergencies in residential areas of the (Engels) city.

Engels airbase in Russia was attacked by a drone again last night.

It's a second attack on this airfield in a month. Airfield is located about 700km from 🇺🇦 border.

This means 🇷🇺 air defense systems are not that good – no radars picked up the drone and it wasn't shot down. pic.twitter.com/poi2MR4FA9

Yurii Ihnat, a spokesperson for the Ukrainian Air Force, said the explosions were the direct “consequences of Moscow’s actions in Ukraine.”

He added, “If the Russians thought that the war would not affect them deep in the rear, they were wrong.”