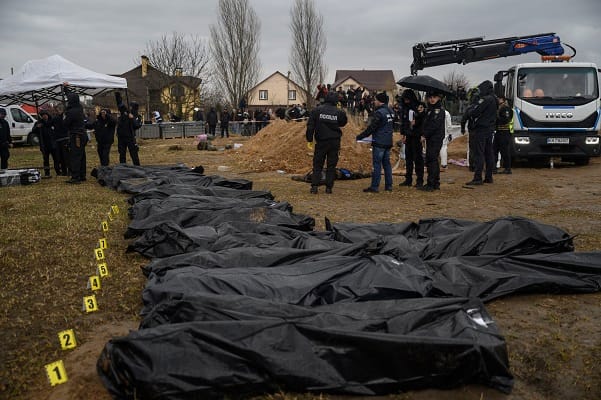 Dead civilians are being “chucked” into airstrike craters in the besieged city of Mariupol and a war photographer warned the situation there is “getting worse.”

Max Clarke went to Mariupol this week and described horrific scenes and told Sky News it was “difficult to exaggerate how bad it was” and said it “just keeps getting worse.”

He said he saw on one street near to the Azovstal steel plant where around 1,000 civilians and Ukrainian fighters are holed up, there was around “80 bodies” just left there.

He added, “Some of them are so decomposed and they’ve been there for so long it looks like dogs or birds have been eating their faces and the only thing that remains is their gold teeth and their blackened skin from the artillery strikes.”

He said that Mariupol was totally surrounded by Russian forces and thought the Ukrainian troops had “no chance” but they were still “fighting.”

Boris Johnson warned on Friday that it is a “realistic possibility” that Russia could win the war following reports from Western intelligence.

Speaking during a news conference in New Delhi, the British Prime Minister said, “The sad thing is that is a realistic possibility. Of course.

“Putin has a huge army. He has a very difficult political position because he has made a catastrophic blunder.

“The only option he now has is to continue to try to use his appalling grinding approach, led by artillery, to try to grind the Ukrainians down.

“He is very close to securing a landbridge in Mariupol now. The situations is I’m afraid unpredictable at this stage.

“We have got to be realistic about that”.