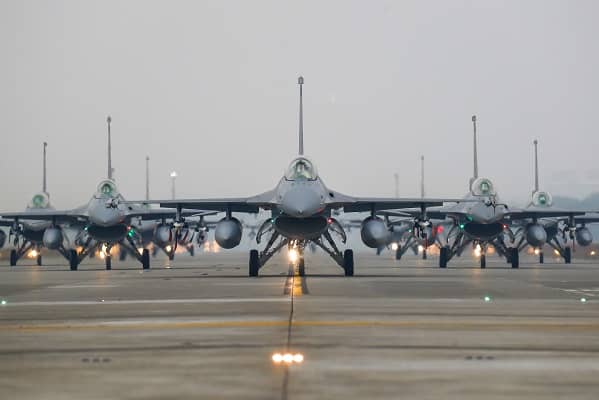 China will follow Russia and lead their own invasion because the “EU has been viewed as just very weak” and they could be set to invade Taiwan.

Europe has been accused of appeasing Russia over Vladimir Putin’s invasion of Ukraine and China has been tipped to exploit the situation and launch a full scale invasion of Taiwan.

Nile Gardiner who is a British Conservative commentator has compared the potential invasion of Taiwan that of Putin’s war in Ukraine to take back the land that was formerly part of the USSR.

Over many months concern has been growing that China will launch an attack on Taiwan as the Chinese President Xi Jingpin has built a big military presence near to the country and on multiple occasions entered their airspace.

The US President Joe Biden has warned that should China invade Taiwan then America will intervene which will spark a global conflict.

President Biden said in October 2021 said “yes” he will protect Taiwan and has since sent US warships to the region.

The US President told CNN that the US has a “commitment” to defend Taiwan which could end up triggering Article 5 as NATO countries could be drawn into all out conflict protecting Taiwan.

Gardiner was asked if the EU’s approach towards China and Russia could lead to an invasion of Taiwan, he responded with, “Certainly.”

“I think the Chinese Communist authority views the EU as a pushover, and that’s the approach Putin has taken as well in the course of many decades.

“And the EU has been viewed as just very weak.”

He said that  the UK is “far more assertive towards the Russians and the Chinese than the European Union” after Brexit.

Gardiner said, “For many decades I think the Chinese and the Russians have taken advantage of EU weakness.

“It has emboldened them and encouraged them.

“I think that certainly, Putin believes the Europeans are just all over.

“He went ahead and invaded Ukraine and I think the Chinese have their eye on Taiwan.

“They view the EU as irrelevant in terms of what they would do.”

Gardiner said the US and the UK, since post-Brexit have an important role to play in “deterring a Chinese invasion of Taiwan.”

He added, “Britain has an important role to play here in terms of standing up to the Chinese, and I do think the Chinese view the UK as a rising adversary.

“Brexit Britain is viewed as a very problematic adversary for the Russians.

“So Brexit is very bad news for both Russia and China.”

Last month the Chinese military warned the US Navy’s 7th Fleet, guided-missile cruiser the  USS Port Royal as it entered the Taiwan Strait.

The People’s Liberation Army’s Eastern Theatre Command said that their forces had monitored the USS Port Royal throughout and gave them a warning.