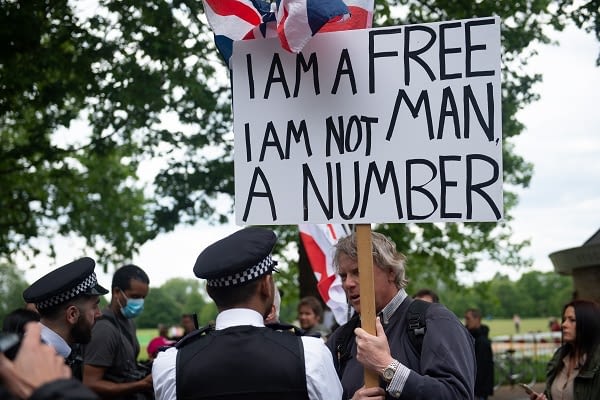 An anti-vaxer group call “Alpha Men Assemble” are training with ex-military men and are learning how to fight and break through police lines.

The activists have threatened “unadulterated defiance” in a “global war against government’s,” a Daily Mail reporter claims who infiltrated that organisation.

The Alpha Men Assemble have more than 7,000 subscribers on Telegram and former Royal Fusilier Danny Glass who is an instructor said that he and other instructors are training mainly middle-aged men to fight and break through police lines.

The group are training to prepare to “hit vaccine centres, schools, headteachers, colleges, Councillors and directors of public health in every area.”

Instructor Glass, 46, told the recruits who are to be considered for the “first task force” that to take the fight is “not for the faint hearted” to “the Old Bill.”

Another instructor who is ex- Royal Irish Regiment and wore a green beret called Gary, claimed to have worked in counter-terrorism for 15-years.

Gary said, “It’s draining, mentally and physically, this war we are fighting. And it is a war.

“It’s not a war that I was used to when I signed up to the military where you have two opposing sides. This is a war being waged on its people by its governments.

The group which saw around 100 people which included 12 women were placed into groups and were being taught boxing drills “should it be needed” along with other types of fighting skills.

Glass told the Mail that the training was “non-combative” and the fighting skills being taught is for “team building.”

Two police officers ventures in to the training session on Saturday at Chase Water Country Park in Staffordshire on Saturday, but once the “Old Bill” had left Glass told the recruits, “Once we’ve got the numbers we’re going to take this to the police.”

The group warned that they will “deal with” any moles who infiltrate the group including the police or the press.

Sam Goody w who runs an events company in Birmingham said, “We need to hit the vaccine centres.”

She added, “We need to hit the schools, headteachers, colleges, Councillors, police, directors of public health in every area… none of us are going to take the f*****g jab and none of our families are.”

One member of the Alpha Men Assemble’s said, “Time for action. No more f*****g about.

“A message to the police… if you pepper spray us, smash us with your battens [sic], threaten us in any way we will defend ourselves, end of, just remember this: we outnumber you.”

A local man named Paul who organised the activists, claims that he has a list of “600 coppers that are criminal paedophiles, run their own brothels, and gather at masonic lodges.”

Glass claimed that they are not an extremist group and that he “will always remain lawful.”

However, in his final speech he said, “Ultimately, we’re going to take it to the Old Bill,’ he bellowed. ‘It’s not for the faint hearted, but we’re going to go and ****ing do ’em.

“We’re not going to walk the walk without talking the talk. It’s what we’ve got to do.”

She added, “The men and women on the front line of the response to this pandemic have made enormous sacrifices in the national interest and are true patriots.

“Those who threaten them are a total disgrace and should not be allowed to get away with it.

“The Government must act to reassure the public this handful of individuals will be swiftly held to account for any unlawful actions.”

NHS fears of mass staff exodus as tens of thousands...

Cutting isolation to five days will ‘help mitigate some of...

People with high levels of T cells from commons cold...

Five good reasons to buy TikTok followers in the UK

Different ways to transcribe videos (and which one is the best)

Indoor plants can make all the difference when working from home

TfL set to increase fines for contraventions on...

‘Another nail in the high street’s coffin’ as...

Sainsbury’s and Argos workers are set to receive a pay rise from 6 March as the company is to make a £100m investment into their staff. In recognition …

Companies need to step up to the...

A third of UK adults did not call in...

Are business lunches tax-free for employees?