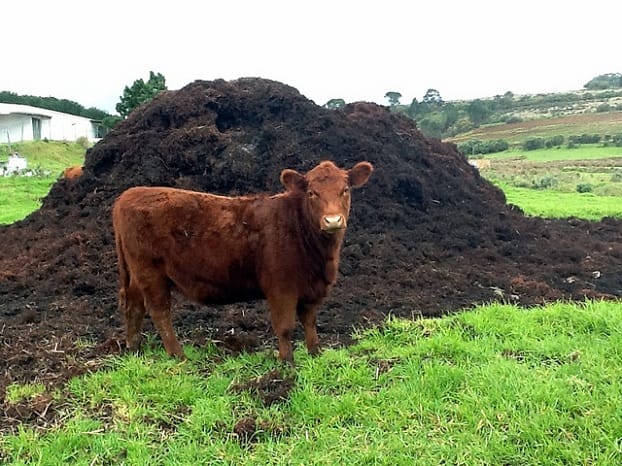 An idea to pooh-pooh? Livestock will eat maggots fed on excrement in EU trial

A new EU trial will see livestock fed on larvae that have been reared on pig, chicken and cow faeces, among other waste products. (Sorry to dump this story on you so early in the day.)

It is currently illegal under EU law to sell meat from livestock whose feed contained maggots, but the meat industry is battling an increased demand for soya beans, which feed is usually made from, and is scratching around urgently for alternative protein-rich feeds.

The maggot trial will be led by the UK’s Food and Environmental Research Agency, and will determine whether fly larvae can be bred on an industrial scale for use in animal feed.

Yorkshire-based fishing-bait farm Grant Bait will start breeding flies on an industrial scale, then ship them to Ghent in Belguim, where trials will be carried out. The project will run for three years.

The maggots won’t just be fed animal droppings – the idea is that waste products from nearby industrial and agricultural processes will be used for nearby maggot farms. That might include vegetable waste as well as excrement, and waste products from manufacturing alcohol, especially whisky.

“What’s used will depend on what’s in the area. In Scotland, if there are 10 whisky distilleries near by it will use the grain fermented in the distillation process,” said Georg Melzer, a partner at Eutema Technology in Austria who is involved in the project.

“In Spain it might be pulp from a tomato field, while in a lot of places it will be the mixture of droppings, straw and sawdust you get on chicken farms.”

Melzer added: “They might be a nuisance in the house but the good thing about flies is that they will live on anything and grow very fast.”

Londoners could be drinking recycled sewage in years to come

Natalie Bennett: “Amazon will disappear! Starbucks? It’d not be a disaster if it left!”