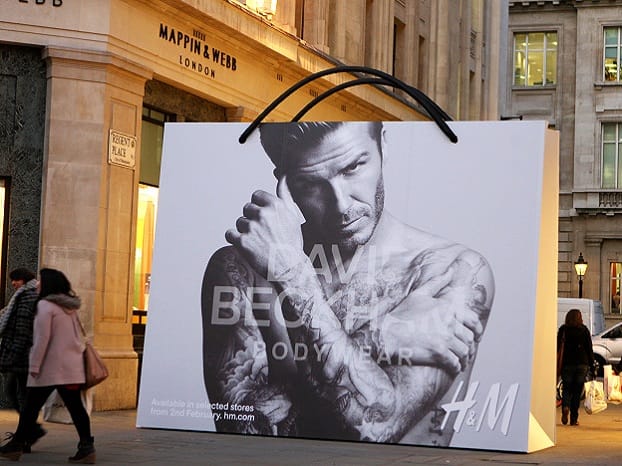 Steve Henry, the advertising legend behind “You’ve been Tango’d” and other iconic ads, on how adverts make you feel rubbish about yourself

I was reading recently about a cafe in Paris which instructed its staff to seat good-looking customers at the front of the room and hide the uglier ones at the back.

What jerks , I thought, until I remembered how ad agencies in the ‘90s used to hire good-looking people on the simple economic basis that “they cost the same as the ugly ones”. But of course advertising’s influence in all this is far more pernicious than just hiring policy.

Advertising has always stressed the urgent need for people to be physically attractive and even my own agency (which liked to question such questionable assumptions) once dabbled in this. In an attempt to reverse a sales decline at Martini, we produced a campaign which informed drinkers that they could only purchase the drink if they were good-looking. We even sent out mail packs which included money-off vouchers in case you were good-looking and (a stroke of genius in my view) money-on vouchers in case you were ugly.

Of course our tongues were firmly in our cheeks. But I was reminded of this the other day as I was getting ready to talk to a bunch of top marketers about breakthrough thinking, and the guy helping me to set up my laptop informed me that I was incredibly ugly.

To be more precise – he was looking at an ad I was planning to show and he said of one character in it – “Is that you in the ad ?” The man in question looked to me like a scruffy, toadying twat – not how I imagined I looked at all.

Especially at the time the ad was shot, some 15 years ago, when (to be perfectly honest) I was incredibly good-looking.

It was a bit of a blow to my self-esteem as I mounted the platform. Did I really look like a rat who had fallen on hard times ? That certainly wasn’t the image I wanted to project in my John Varvatos black suit and Christian Dior white shirt.

It made me reflect on how an awful lot of advertising makes people feel rubbish about themselves – and I must say that (the Martini joke notwithstanding) I have always found that rather worrying.

Whether it’s implying that you have bad breath and smelly armpits – or insinuating that if you can’t afford the latest bit of wearable technology, you’re somehow not successful enough – it generally comes across as a pain in the arse.

If comparison is the thief of joy –  advertising, with all its before-and-afters, is an elegantly attired but fatally effective gentleman burglar.

Part of my talk was about how large companies should use their marketing budgets to try to make the world a better place – something I’ve written about before.

And in amongst the mire of ads making people feel like they’re not good enough, I love the story of how Dove’s “Campaign for Real Beauty” came about.

This may be apocryphal but I’ve never let that worry me.

Apparently the team working on the account went to the Unilever Board and asked if they could interview their wives and daughters. Every single woman who was interviewed then said the same thing – they felt they weren’t good looking enough.

They all felt inadequate and anxious – and apparently this had the result of making several men on the Unilever Board break down in tears. The people they were most fond of in the world had been tainted by advertising and made to feel inferior by it.

“Grown men were weeping”, as Jim Morrison once sang about something or other (but whatever it was, it probably wasn’t a Unilever board meeting).

And then the ad agency said “That’s the result of advertising in the Beauty sector. But we can be different. We can create a campaign that doesn’t make women feel bad “.

And thus was born the Campaign for Real Beauty – in my view, one of the most interesting pieces of thinking ever to come out of an ad agency.

I used that story in my presentation – despite the fact that my technical preparation had convinced me that I looked something like a fat weasel in cheap glasses.

It would be like standing on the high diving board, preparing for a double-tuck-backward pike, and then have someone tap you on the shoulder to tell you that your cock is hanging out of your Speedos.

Actually that reminds me – when Jim Morrison said “grown men were weeping”, he was riffing onstage about the time he was arrested for exposing himself in Miami. Morrison – who the writer Nik Cohn described as looking like he’d been made up by two gays on the phone – had long lustrous hair, a face like a damaged angel, and a famously lengthy male member.

If the men who created the marketing in the Beauty sector were all asked to measure up to the standards of Jim Morrison, they’d maybe understand some of the emotional damage that advertising is guilty of …

In the meantime I’m off to Paris. I might visit Jim Morrison’s grave in the cemetery Pere Lachaise, and then I might have a nice steak and frites afterwards.

I’m not particularly bothered about sitting near the kitchens.

Steve Henry was founder/creative director of Howell Henry Chaldecott Lury, the agency voted Campaign’s Agency of the Year three times and Campaign’s Agency of the Decade in 2000. He has won most of the major creative awards, including the D&AD Gold Pencil, the Grand Prix at Cannes, the Grand Prix at the British Television Awards, and the President’s Award at Creative Circle (twice).

In 2008 he was included in Campaign Magazine’s inaugural Hall of Fame, a collection of the 40 most influential people in British advertising over the past 50 years. He now works as a creative consultant.

Steve has just launched Decoded, a ground-breaking programme that promises to teach anybody code in one day.

AdMan: What you can learn from Marilyn Monroe’s rear

AdMan: The quality of nipples in advertising