160,000 people flocked to the Westfield Stratford City shopping centre in east London during its first day of trading, figures have shown.

A spokesman for Westfield said the centre had seen “an absolutely phenomenal first day” – far exceeding the predicted 100,000 shoppers expected to head down for a look.

The first-day footfall for the £1.45bn centre even surpassed the 150,000 who turned up for the opening of its sister mall Westfield London in Shepherd’s Bush three years ago.

City analyst Nick Bubb, of brokers Arden Partners, was one of many people descending upon the centre for its opening day, and he suggested that the first-day traffic painted a bright picture for the future.

He said: “Three years on from the success of Westfield London, this shows that big new centres can still prosper in an age of online shopping, if they are well located and organised, so Westfield Stratford has every reason to be optimistic.”

The Ignite group opened a branch of its restaurant Bumpkin, at the 1.9 million sq ft centre. Ignite chief executive Matt Hermer said that the branch achieved 350 covers to “smash all internal forecasts”.

He added: “We were astounded and amazed at how many people came out. You could hardly see any of the buildings there were so many people. There was no sign of the recession in any way, shape or form.”

The Westfield spokesman said that the firm was left feeling proud after swathes of people from London and beyond flocked to the centre for its opening.

Firms opening on the day saw crowds that made the Boxing Day sales dash on the capital’s most famous streets seem tame.

Andy Street, the managing director of John Lewis, the biggest shop in the centre, said: “We’re not investing for one year, we are investing for 50 years and probably more. We are confident Stratford will become the natural retail destination in east London.”

But it wasn’t just the retailers left open-mouthed by the scenes, with consumers grabbing a bite to eat in the food court also having plenty to say.

Roxane Ogiste, a mother of two from Hackney, said: “I grew up in Hackney and I never believed we’d have something like this on our doorstep. It’s completely packed today, but it’s lovely and it’s going to pull in people to the area.” 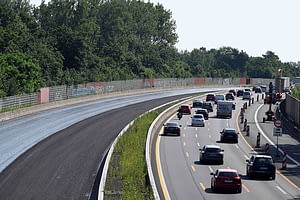