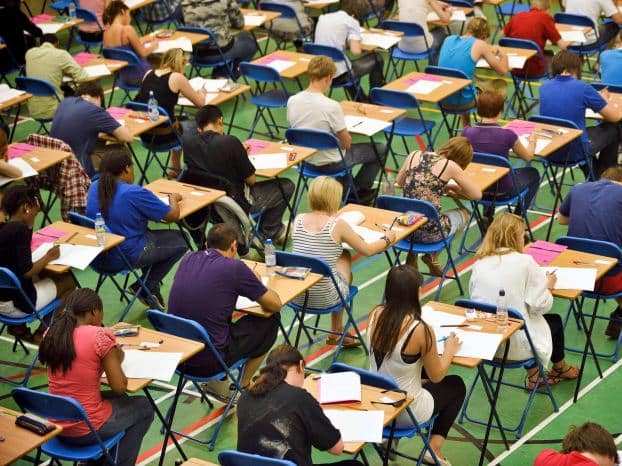 The 700,000 teenagers across England, Wales and Northern Ireland who today receive their GCSE results are faced with what we all can see is a fairly stark future.

Go to university, and you face fierce competition, crippling costs, and a burden of debt that will last, for most, a couple of decades.

Try to get a job, and, well, there are none. UK youth unemployment (age 16 – 24) is 21.9%. Even excluding those in full-time education, the figure is still 20.7%, the BBC estimates. Meanwhile, employers are complaining that school-leavers don’t have the skills needed to fill the jobs they do have on offer.

Around half of this year’s GCSE results lot will go to university when the time comes, if we assume more or less all university places on offer are filled. The middle class obsess over their kids making it to uni, and their zeal has leached into all walks of familial and school life. Tony Blair sealed the must-go-to-uni deal when he decided his government would aim to get half of school-leavers into university.

Why am I telling you all this? Because I think our entire education system is wrongly constructed around this ridiculous idea that university should be the pinnacle of a child’s education, and I believe it is damaging our economy.

Firstly, let’s get something straight. Not everyone is academic. We all know that. So why are so many parents and guardians so disappointed when their kid gets bad GCSE results? Wouldn’t it be far better if, instead, they nurtured any non-academic talent their child had?

To see how this might work in action, let’s take a look at Germany’s education system, which I think is one of the most admirable and sensible models around. Germany has a dual secondary education system. From age 11/12, those with stronger vocational and technical skills are gradually moved towards a vocational/technical education rather than an academic one.

So from the age of 13+ (dependent on how well the pupil performs), a pupil could enter full-time vocational training. This might be on the young side, I agree, but the idea that teenagers can take a vocational or academic route is to be loudly applauded. (Yes, some schools and colleges have adopted these principles, but we all know they are very much in the minority.)

What this dual system means is that, in Germany, vocational routes are not treated with snobbery. It is, from what I’ve heard, much more socially acceptable for the child of a middle class family to become a carpenter or electrician, say, than it is in the UK.

The result is a healthy economy in Germany founded on a good spread of family-run trade businesses passed through generations, start-ups in vocational/technical areas, and academic and professional careers.

Meanwhile, here in the UK, anyone who has been to uni in the last 10 years can testify that many – if not most – students spend much of their time getting wasted rather than studying, ending up with piles more debt, a new bad habit or two, and marginal academic advancement. And even those that do study end up with a degree in philosophy with not much idea of how to apply it in the real world.

So we end up with half of a generation of young people leaving university who pretty much all turn their noses up at the very low-skilled jobs we need to keep the economy functioning, who also struggle to find jobs in the highly competitive and “sexier” industries they believe they are all now qualified for.

Of course, in major cities these lower-skill-level job gaps get plugged by immigrant workers, willing to take a low wage and work hard for it. But there is something wrong in the fact that so many young people seem to be doing three internships back to back because they have their heart set on a career in film, while manufacturers complain of a shortage of young talent applying to their companies for work.