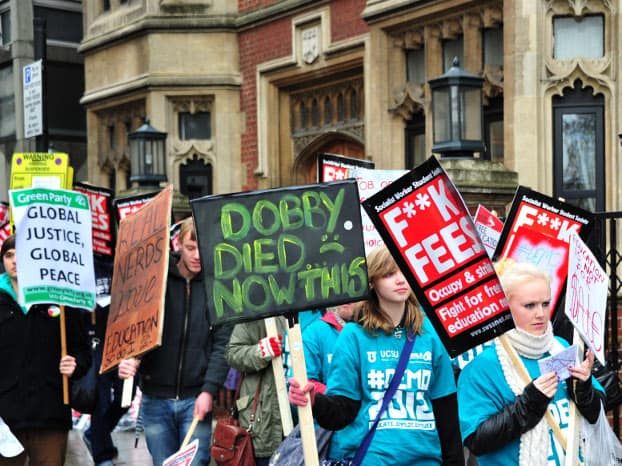 Thousands of students to stage protest in London tomorrow

London will see a big protest against tuition fees tomorrow with thousands of students marching through central London.

Hordes of students from various UK cities including Aberdeen, Glasgow, Newcastle, Leeds and Sheffield are coming to participate in the demo organised by the National Campaign Against Fees and Cuts (NCAFC) and the Student Assembly Against Austerity.

Kirsty Haigh, from National Union of Students Scotland and NCAFC said: “We believe education is a right that should be accessible to everyone and barriers such as fees are unjust. That is why I, and many other Scottish students, will be marching this Wednesday.”

Hannah Sketchley, from NCAFC said: “We will be marching from the heart of the University of London – a symbolic site of protest over workers’ rights and the right to protest over the past year, to the centre of political power. We are marching to make a point and build a movement.”

Hattie Craig, from Defend Education Birmingham and the NCAFC said: “Students are daring to call for demands which envisage a radical reshaping of education. This demonstration, expected to be the biggest since 2010, is the start of big things for the student movement.”

Students will begin marching from Malet Street at 12pm and will walk through Strand, Trafalgar Square and Whitehall. The demo will end at 4pm at Old Palace Yard outside the Houses of Parliament.

This Snapcash video from Snapchat will have you thinking ‘what on earth did I just watch?’

Branson to launch a new line of luxury cruises – who’s investing in it?

This is what’s hurting the London property market