Home Business News Russian missiles blow up a shopping centre with more than 1,000 inside and ‘the number of victims is impossible to imagine’ 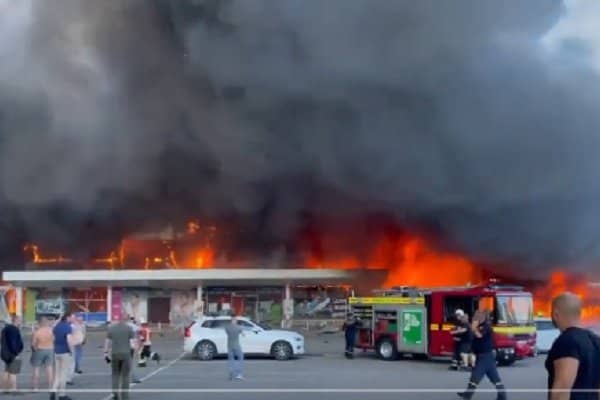 Russian missiles have blown up a shopping centre in Kremenchuk, Ukraine where it is believed that more than 1,000 civilians are inside.

Kremenchuk right now… 🇷🇺deliberately hit shopping center, with more than thousand civilians inside. In the middle of the day. Just because it wants to kill. To fill everything up with Ukrainian blood. RF – a terrorist state. RF – the most disgusting war.#RussiaIsATerroristState pic.twitter.com/nwAYQCrImb

President Volodymyr Zelensky said that the “number of victims is impossible to imagine,” whilst the city’s Mayor Vitaliy Meletskiy warned people have died with many injured but did not provide any further details at this time.

NEW: Russian troops fired on a mall in the Ukrainian city of Kremenchuk, leaving more than 1,000 civilians trapped in the ensuing fire, Zelensky posts to Telegram.

"No danger to the Russian army. No strategic value. Only the effort of people to live a normal life" Zelensky wrote pic.twitter.com/SGBhjbWAIS

Zelensky said on Telegram, “The mall is on fire, firefighters are trying to extinguish the fire, the number of victims is impossible to imagine.”

⚡️We are alive: video of people trying to escape from a shopping mall in #Kremenchuk pic.twitter.com/YOk9LKUnCz

“No danger to the Russian army. No strategic value. Only the effort of people to live a normal life” Zelensky wrote.

The President’s aide Mykhailo Podolyak said on Twitter, “Russia is deliberately firing a rocket into a shopping mall with more than a thousand civilians.

“Just in the middle of the day. Just because he wants to kill.

“To fill everything with Ukrainian blood. Russia is a terrorist state.

“Russia is waging the most disgusting war.”

Kyrylo Tymoshenko, deputy head of President Volodymyr Zelenskiy’s office, said nine of the wounded were in a serious
condition.

He added, “At this moment, 20 wounded are known, of which nine are in severe condition.

“It has already been confirmed that two people have died. The rescue operation continues.

“We are sending ambulances to the scene, preparing regional hospitals to receive the wounded.

“From all nearby areas, rescuers are sent to the scene to put out the fire and work on eliminating the consequences.”