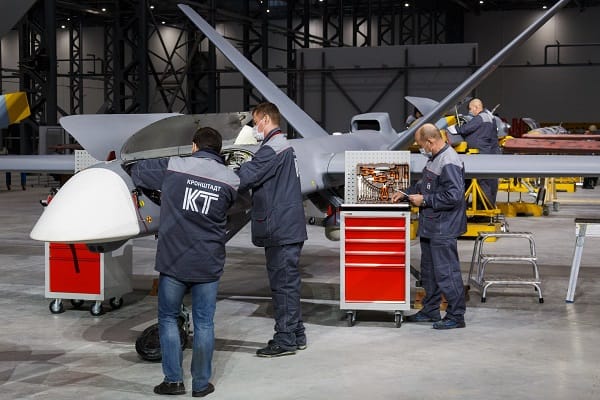 Russia's first specialiSavitskiy Vadim / Newscom / Avalonzed facility for the manufacturing of large-sized military UAVs, which Kronstadt has established in Dubna, near Moscow. The Sirius UAV, according to Kronstadt, is the next step in the development of the current Orion UAV. The improvements included increased size and mass, some design changes, and the installation of new electronic equipment. In comparison to its predecessor, the drone will be able to carry a bigger payload and operate at a higher altitude.,Image: 658502295, License: Rights-managed, Restrictions: , Model Release: no, Credit line: Savitskiy Vadim / Newscom / Avalon
Aviation NewsBusiness NewsPolitics NewsVideoWorld News

A Russian military drone has crashed in a NATO city which has caused a “serious incident” as it flew through several countries across the alliance.

On Thursday evening at 11pm the drone with “red stars on it” crashed in Croatia’s capital Zagreb, no deaths or injuries were reported.

Croation media reported that a loud explosion was heard near to Lake Jarun in Zagreb and two parachutes were found and several vehicles were damaged.

This Tu-141 drone from the Soviet era is what most likely crashed in Zagreb last night. pic.twitter.com/hVL7a4ckk4

Croatian President Zoran Milanovic said that according to initial information the drone had came from Ukraine and crashed once it had run out of fuel.

“We estimate that this was an incident and it was not (military action) directed against Croatia,” Milanovic added.

#Croatia 🇭🇷: A remotely-controlled UAV has reportedly crashed in #Zagreb.

The drone seems to be a possible Topulev Tu-141 ‘Strizh’ UAV —very likely came from #Ukraine.
It is currently unknown if it was owned by #Russia or Ukraine. pic.twitter.com/VKZmY2XC4K

Croatian Defence Minister Mario Banozic told a press conference, “This was a very serious incident. We will have to investigate it thoroughly.”

Hungarian Foreign Minister Peter Szijjarto said Hungary was closely cooperating with Croatia and other NATO allies over the drone incident which breached their airspace.

“Our authorities are examining what happened, as according to present data, the air space of several NATO members including Hungary was affected by the drone’s flight,” he said.

An unmanned, Russian-looking aircraft, possibly intended for the town of Yarun in Ukraine, crashed last night in the neighborhood of Jarun in Zagreb, Croatia, some 1000 km away.

Checking now whether there are places in Ukraine that resemble my street’s name. pic.twitter.com/Ey6H3elKwr

The drone that crashed in the capital of Croatia does not belong to Ukraine, adviser to the Minister of Defense Markiyan Lubkivsky said.

“This drone did not have Ukrainian markings, it had red stars on it.

“This is not a Ukrainian drone,” Lubkivsky said on the air of the national telethon on Friday.

He said that an unmanned aerial vehicle crashed in the center of Zagreb at night and that the Croatian special services are currently studying this incident in cooperation with the Ukrainian Ministry of Defense, the General Staff of the Armed Forces of Ukraine and the Ministry of Foreign Affairs.

“We turned to our Croatian partners with a request to quickly and effectively investigate this incident in order to understand what kind of drone it is, who its manufacturer is and why it appeared in Zagreb,” Lubkivsky said.