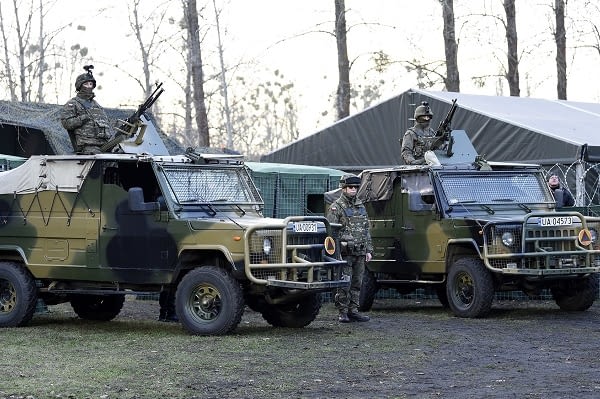 Poland are fearing that there could be an assault on their border as thousands of migrants and refugees are gathering on the border.

Troops as massing on the Polish and Belarus border and Poland’s Border Force guards have reported that Belarusian forces are providing weapons to the migrants to help them get into the EU.

Belarusian soldiers have been accused of helping the migrants and the refugees to the border and teaching them techniques to help them breach the border and enter into the EU.

Poland has sent 15,000 armed soldiers to the border to keep the refugees and migrants out, which could see conflict.

A Polish Border Force spokesman told MailOnline, “After a ‘quiet’ night in the vicinity of the camp in Kuznica, we are currently observing that more groups of armed officers of Belarusian services are located in the place.

“We are noticing a commotion among migrants.

“There is also a TV broadcast van.”

He added, “Some tents are starting to disappear. Migrants get instructions, equipment and gas from Belarusian services.

“You can see that the Belarus side is getting ready today for a big attempt at crossing the border.

“Our forces are ready for action.”

Security Services Minister Stanislaw Zaryn said that “more people are appearing on the side of Belarus at the border with Poland, escalating the situation.”

Posting a photo of a uniformed man on Twitter, he said, “This man fired shots in the air, then tried to damage the Polish border barrier.”

The Polish Prime Minister called on NATO to take “concrete steps” to resolve the escalating issue on the border.

He told a press conference, “It is not enough just for us to publicly express our concern – now we need concrete steps and the commitment of the entire alliance.”