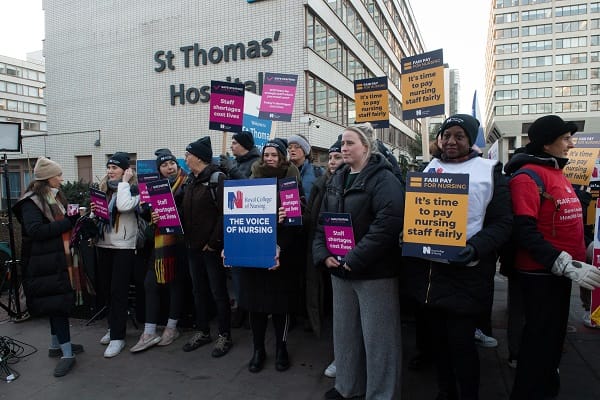 Nurses are living ‘on cloud cuckoo land’ demanding 19% pay rise and the government must face down unions, says Widdecombe

Speaking to FairBettingSites Anne Widdecombe has said that nurses are living “on cloud cuckoo land” by wanting a 19% pay rise.

Widdecome who is a former Tory MP and an author said that the government must tackle the unions in the “same way Margret Thatcher” did.

She also warned that the Rail, Maritime and Transport Workers union (RMT) chief is losing support but non the less we are facing a crisis of strikes not seen on this scale since the 1970s.

Widdecombe said, “The Government needs to face down the unions in much the same way that Margaret Thatcher eventually did and simply say I’m sorry, we understand what inflation does, but the most important aim has to be to get inflation down.

“We can’t do that if we are putting pay rises near the level of inflation. There has to be a gap. I would even say that to the nurses.

“I understand entirely, but 19% is cloud cuckoo land as it has to be paid for.”

Speaking about the RMT chief Mick Lynch she said the government needs to stand up to him and remain “firm.”

“There was even a point where the doctors were taking industrial action, then if you died, you couldn’t get buried because the grave diggers were out on strike.

“London was full of overflowing rubbish and goodness knows what else. I just remember it with shuddering horror.

“The causes are very similar, because the major cause is inflation.

“We have been spoiled now for a couple of decades, we’ve somehow grown to regard it as an entitlement, when there’s inflation, people’s pay packets are worth less, so they want to catch up with inflation, so if you do that, it just puts the prices up and you get into the wage cost spiral.

“The 70’s were worse because it was allowed to go on and that’s why this government has to stop this going on and face down strikes.

“In the end, whole generations don’t remember the 70s, even children alive in the 70’s don’t have active adult memories of what it entailed, so people think we are in an entirely new situation. We aren’t.

“One of the big arts of politics is to learn the lessons of the past.”

Widdecombe said that the government needs to tighten up anti-strike laws the same as Thatcher did in the 70s.

Widdecombe said, “I think anti strike laws have a very big role to play. They did in the Thatcher years, but in the 70s there was no notice of strikes.

“We all know now when the trains aren’t going to be running, get it in the diary. We make other arrangements as we have notice. In the 70s they could strike at the drop of a hat. They had a lot of unofficial strikes or wildcad strikes.

“The laws that Thatcher introduced helped tremendously, now probably we do need to tighten up. I would much rather the government tried to resolve this by appealing to the common sense of the public.

“Unions won’t go on strike if they don’t think they have the support of the public.

“Mick Lynch is gradually losing support, but he started with a lot.”

The Prime Minister Rishi Sunak does not have the “inner Thatcher” and Widdecombe question’s hi vision and claims his Cabinet is “ungovernable.”

She said, “I’m not convinced Rishi Sunak has an inner Thatcher. I think Rishi is a perfectly competent manager, but I don’t see any vision.

“What is his vision for the future of Britain? Liz Truss had a vision. The vision was sound, what was absolutely hopeless was the implementation.

“They tried to do everything at once, they did it without consultation, didn’t try and take people with her but the actual vision of a low tax, highly competitive economy, making the most of Brexit and our opportunities to compete with rather than be subjectived by the EU was right.

“I don’t know what Rishi’s vision is. When you say summon his inner Thatcher, I’m not sure he’s there.”

She added that Sunak will always be “afraid to do things which are original because he has such a hopeless mutinous party.”

Widdecombe said, “Sunak is a perfectly reasonable manager and so long as that is all that you require, that is absolutely fine, but it’s not a long term solution to anything.

“You might have wanted to jump off occasionally, but you always knew where it was going, because she had a philosophy, she had a vision, she had a determination to make everything happen.

“That is his biggest drawback, he’ll always be afraid to do things which are original because he has such a hopeless mutinous party.”