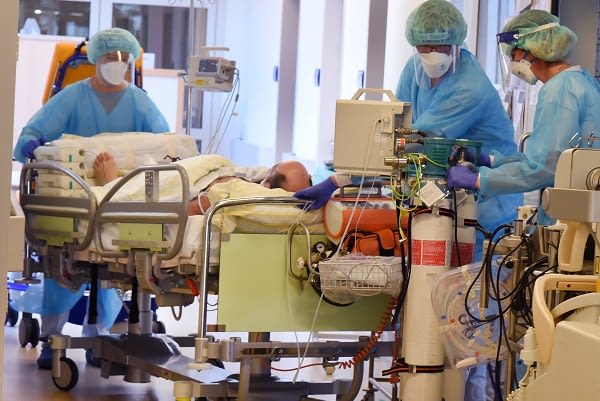 More than 82,000 NHS staff were absent early last week which ‘means more patients to treat and fewer staff to treat them’

NHS data shows that the staffing crisis is continuing to rise as those absent due to Covid has soared by 59% in a week.

NHS England data shows that on the 2 January there was 39,142 staff absent for Covid reasons at hospital trusts in England, up by 59% from the previous week with 24,632, which is more than three times since the start of December where there was 12,508.

One in 25 or 4% of NHS staff who work in acutr hospital trusts are either self-isolating or are off sick due to the virus.

Overall, there were 82,384 NHS staff at hospital trusts in England who were absent for all sickness reasons on 2 January.

He warned that, “Omicron means more patients to treat and fewer staff to treat them.

“In fact, around 10,000 more colleagues across the NHS were absent each day last week compared with the previous seven days and almost half of all absences are now down to Covid.

“While we don’t know the full scale of the potential impact this new strain will have, it’s clear it spreads more easily and, as a result, Covid cases in hospitals are the highest they’ve been since February last year – piling even more pressure on hard-working staff.

“Those staff are stepping up as they always do; answering a quarter more 111 calls last week than the week before, dealing with an increasing number of ambulance call outs, and working closely with colleagues in social care to get people out of hospital safely.”

Patricia Marquis, the Royal College of Nursing’s director for England, said, “Outside of healthcare, staffing shortages are closing shops and cancelling trains but nurses can’t stop helping their patients.

“Instead, they find themselves spread thinner and thinner, but they can’t keep spinning plates indefinitely either – this situation is simply not safe.”

Speaking to Sky News, Dr Chaand Nagpaul, council chairman of the BMA, said, “we have never known this level of staff absence before.”

He added, “Every winter of course, the NHS has additional pressures, but I don’t think anyone who’s worked in the NHS has experienced this level of absence of their colleagues and we’re feeling it in very real time because doctors and nurses and healthcare workers are having to cover for their absent colleagues, that’s adding additional, exceptional strain.”

When asked how close the NHS is to being overwhelmed, he said, “I think that the words like overwhelmed… I mean, I think we should just look at the reality.

“I’m a GP, I’ve never known it this bad. We’re having to literally contact patients without notice that the staff member or a doctor or nurse just isn’t in today because they’re self-isolating.

“This is not normal, and therefore the Government does need to recognise this is clearly an NHS under extreme pressure and the living reality sadly for thousands of patients is that they’re suffering the consequences of such pressures and also staff absence.”

Dr Nagpaul said it is important “the government doesn’t just wait to ride this out, because every day people are suffering.”