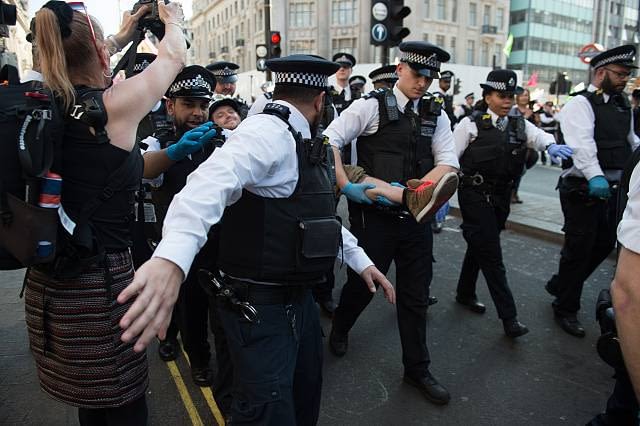 Extinction Rebellion: Met Police slammed for being ‘sloppy with the law’

The Metropolitan Police have been slammed by human rights lawyers over their decision to ban Extinction Rebellion (XR) from being allowed to protest in London, MPs have also criticised the move.

XR has taken steps to bring a judicial review have criticised the Met’s Police “disproportionate and unprecedented attempt to curtail peaceful protest.”

In a statement Tobias Garnett, a human rights lawyer for XR has said a “letter before action” has been sent to the Met asking for an “immediate response.”

The Met Police have been firmly warned by XR that they have a deadline of 14:30 to respond to the letter of face a claim in the Hight Court.

He said that the police’s response simply “risks criminalising anyone who wants to protest in any way about the climate and ecological emergency that we face.”

This is a “a disproportionate infringement of our right to protest.”

Garnett added, “We will be looking for an expedited hearing either today or tomorrow morning.”

Adam Wagner another human rights lawyer described the move by the police as “draconian and extremely heavy handed.”

He said on Twitter, “We have a right to free speech under article 10 and to free assembly under article 11 of the (annex to the) Human Rights Act. These can only be interfered with if the interference is lawful and proportionate. I think the police may have gone too far here.”

Speaking to the Victoria Derbyshire programme, ER campaigner and former Met Police officer Paul Stephens said, “Police are being really sloppy with the law, and it won’t stand up in court.”

Sadiq Khan the mayor of London has said he is “seeking further information” over the banning of protesting in London.

Khan said, “I believe the right to peaceful and lawful protest must always be upheld.”

Shadow home secretary Diane Abbott said on Twitter, “This ban is completely contrary to Britain’s long-held traditions of policing by consent, freedom of speech, and the right to protest.”

However, the home secretary Priti Patel said on Twitter that “supporting our police is vital” and then accused the Labour Party of supporting “law breakers.”

She said, “Officers from around the country have done a fantastic job policing XR protests. Supporting our Police is vital. Labour support the law breakers who have disrupted the lives and businesses of Londoners. They cannot be trusted in Downing Street or the Home Office.”

Taylor said, “This was an operational policing decision to help us get London moving again.

“After nine days of disruption we felt it is entirely proportionate and reasonable to impose this condition because of the cumulative impact of these protests.

“A significant policing operation continues and we will take robust action against anyone engaged in unlawful protests at locations targeted by Extinction Rebellion.”

AS of 8:45 on Tuesday morning the Met said they had arrested 1,457 protesters in nine days.