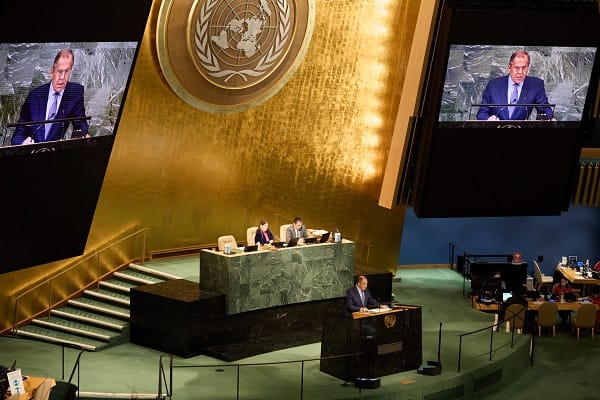 Russia’s Foreign Minister Sergei Lavrov told the United Nation General Assembly that any region which is annexed by Moscow will come “under full protection,” meaning an attack on those areas is an attack on Russian soil.

In eastern Luhansk and Donetsk regions including Zaporizhzhia and Kherson, sham voting is taking place in referendums which has seen many people voting up to three times under armed guard of Russian soldiers.

Russian soldiers have been seen going door to door forcing people to sign voting forms whilst being faced with the threat of arrest looking down the barrel of a gun.

Lavrov  was asked at the conference if Russia has grounds to use nuclear weapons to defend the annexed regions.

Last week Vladimir Putin said that he “is not bluffing” over the use of “weapons of mass destruction” and Lavrov claims the people in the Russian occupied areas of Ukraine have been “suffering from the abuses of the neo-Nazi regime.”

The former Russian President Dmitry Medvedev, warned on Thursday that the regions which are holding referendums until Tuesday will be “accepted into Russia” and they will be “under the full protection of the state.”

Medvedev added, “Russia has announced that not only mobilisation capabilities but also any Russian weapons, including strategic nuclear weapons and weapons based on new principles, could be used for such protection.”

Kuleba added, “We call on all nuclear powers to speak out now and make it clear to Russia that such rhetoric puts the world at risk and will not be tolerated.”

The Ukraine Foreign Minister wrote on Twitter, “Ukraine won’t give in. We call on all nuclear powers to speak out now and make it clear to Russia that such rhetorics put the world at risk and will not be tolerated.”

Ukrainian President Volodymyr Zelensky condemned the voting in the occupied regions as a “crime.”