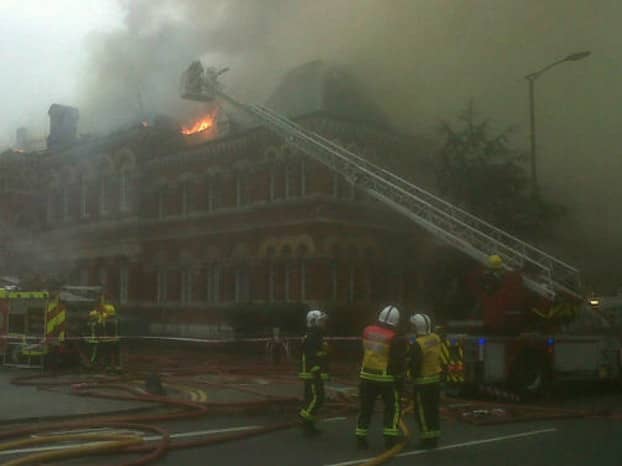 More than a hundred firefighters are tackling a blaze in Walworth, south-east London, which spread to a museum and library.

The whole of the roof of the museum and library in Wansey Street, SE17, is on fire. Firefighters have reported no injuries at present and the cause of the fire is not yet known.

Station Manager Peter Critchell, who is at the scene, said: “Flames are coming through the roof and there is thick grey smoke billowing up. Firefighters are still working hard at the scene to try and bring the blaze under control.

“We now have water jets attacking  the fire from the four corners of the building. We evacuated 30 people from inside the museum and firefighters will be making efforts to salvage as many of the artefacts as possible.”

The Brigade’s Assistant Commissioner for Operational Assurance, Dany Cotton, said: “We’ve got well over a hundred firefighters working hard at the scene to bring the fire under control.

“It’s a large blaze and the whole of the building’s roof is alight but fortunately we’ve not had reports of injuries.”

120 firefighters and officers are at the scene, along with 20 fire engines. The brigade was called just after midday (12:28pm) and engines are set to remain at the scene for the next few hours.

Southwark Council leader councillor Peter John said: “A fire has broken out in one of our buildings on the Walworth Road which houses the Cuming Museum, the home of the worldwide collection of the Cuming Family and the museum of Southwark’s history.

“It is too early to say what the cause of the fire is and how long services from that building will be suspended for.

“Whilst our first concern is for the safety of residents and our staff, we are also worried about possible damage to the museum’s collection.

Further details will be added as they emerge…

The #Walworth fire is in a @lb_southwarkcouncil building containing a museum, library & 1 stop shop for local residents.

Fire brigades to Boris: “Your catastrophic cuts will put people in danger”