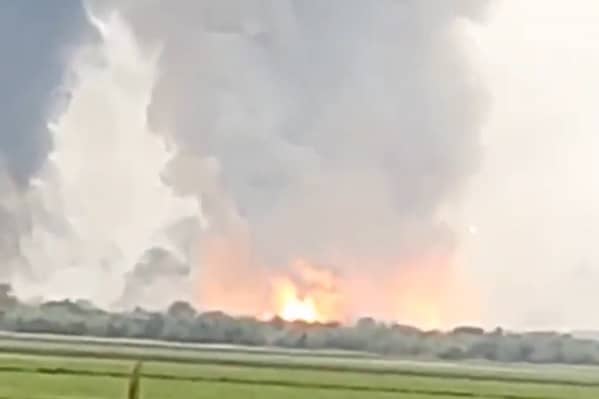 On Tuesday morning multiple explosions rocked northern Crimea following an attack by Ukraine on a Russian ammunition depot sending plumes of smoke into the sky.

Anton Gerashchenko, Ukrainian advisor to the Minister of Internal Affairs, shared footage of the explosions at the ammunition depot, which happened in the village of Mayskoye.

Fedorov wrote on Tuesday morning, “Meanwhile, the evacuation of the population began near Dzhankoi due to the detonation of ammunition. No one will have time to hide. And there will be nowhere to retreat soon!”

The head of the Mejlis of the Crimean Tatar people Refat Chubarov said, “Thousands of Russian citizens are already moving towards the bridge across the Kerch Strait.

“You were warned immediately after Novofedorivka – do not stay long, leave our Crimea ahead of time… No, you wanted to wait for explosions in Dzhankoi.”

Explosions at the ammunition depot – media in the occupied Crimea pic.twitter.com/6zowH6H6Nw

Last week the Defence Ministry issued a warning to Russian holidaymakers to go home following an attack at the Saki Russian air base in Crimea.

Last Tuesday Ukrainian Special Forces carried out the Top Secret operation to blow up the Russian air base in Crimea and Ukraine then warned that more strikes will happen “in the coming days” in the annexed peninsula.