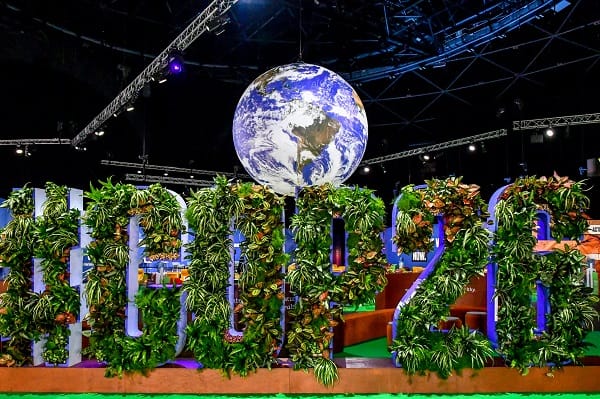 Campaigners from Global Justice Now will protest around the country on Saturday to demand the UK withdraws from the Energy Charter Treaty, an international agreement allowing fossil fuel companies to claim billions from governments when they take action against climate change.

The UK faces legal claims of up to £11 billion from oil and gas companies over the steps needed to meet its Paris Agreement target, reaffirmed at COP26 in Glasgow, to keep warming below 1.5°C, according to recent research published in the journal Science.

In north London, a protest will take place at Uniper’s Enfield Power Station from 1pm. The German company is suing the Dutch government for £774 million over its decision to phase out coal under the ECT.

The protests follow talks over reform to the ECT in Brussels this week between the 50 countries that are party to the treaty, including the UK. Reports suggest they have been unable to agree on changes.

It is the final round of talks ahead of a crunch June deadline when European Union countries have said they will consider withdrawal if the treaty cannot be reformed to be in line with the Paris Agreement. Campaigners are urging the UK to follow suit and commit to withdraw.

Jean Blaylock, trade campaign manager at Global Justice Now, said, “The fossil fuel industry is already doing everything in its power to delay and deter climate action, and we have lost too much time already to this glacial pace. The last thing we need is for governments to give these companies a secret weapon in their battle to squeeze maximum profits out of climate breakdown. But that’s what we’ll be doing if we fail to withdraw from the Energy Charter Treaty.

“It cannot be right for big polluters to get massive payouts simply because governments are making the necessary decisions to tackle the climate crisis. It is an affront to democracy and an affront to justice. It is long past time to bring this shadow corporate court system to an emphatic end.”

The legal claims are made possible by a controversial system of secretive tribunals known as investor-state dispute settlement, or ISDS, which is written into trade treaties. The Energy Charter Treaty, which contains these tribunals, is the greatest source of risk of these potential claims and is already being used by fossil fuel companies.

The most recent UN Intergovernmental Panel on Climate Change report warns of “regulatory chill” from investor-state disputes, specifically mentioning the ECT and highlighting the risk of fossil fuel corporations using this to “block” the phase-out of fossil fuels by making the transition unaffordable.

The day of action follows protests on Wednesday targeting companies involved in ECT cases. In Salisbury, a protest took place at the offices of Rockhopper, an energy company suing the Italian government for £236 million over its refusal to allow offshore oil drilling. In Glasgow, protesters marched to the office of Clyde & Co, a specialist law firm that helps to perpetuate the ISDS system.

Is the fourth industrial revolution reshaping our world?

More than two thirds of business travel is already carbon...

From pledging to implementing: Third of small businesses have formal...