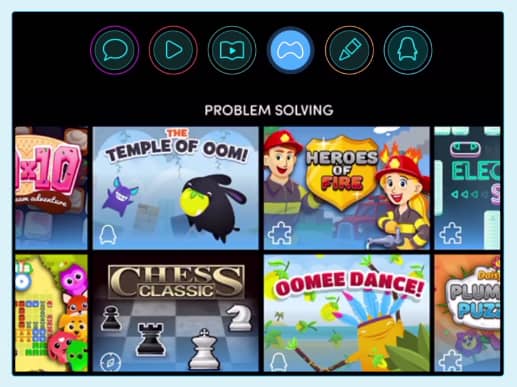 When it comes to business ideas, necessity is so often the mother of invention. For Azoomee co-founder Estelle Lloyd, that necessity was a safe place for young children to begin embracing life online. “There wasn’t a multimedia platform curated especially for children, where they could learn how to be online in complete safety,” she says.

So in 2005, Azoomee was born. The subscription service offers thousands of video games and TV episodes for five to ten-year-olds. Content is chosen for its entertainment, educational and/or social and emotional learning value. There’s also a series of BAFTA-nominated, NSPCC-approved tutorials for kids on how to operate safely online.

There are no group spaces – the instant messaging feature only connects kids once their parents accept an invitation. And there’s no way for children to buy freemium content without their parents knowing.

The road to expansion

The platform took about 18 months to develop, and was initially available through the main app stores. Since then, Azoomee has developed revenue-sharing partnerships for tablet distribution with O2 and Argos, and is soon to launch an Amazon Prime channel.

As a result, its user base has increased exponentially, growing more than 330 per cent in the ten months since December 2016. Currently available in the UK, Azoomee has international expansion firmly in its sights for 2018. Its initial focus will be the Anglophone countries, where content won’t need localisation; Scandinavia, where the audience is effectively English-speaking; and the Spanish-speaking world.

Estelle “couldn’t believe” the help on offer when she discovered the Mayor’s International Business Programme. She’s since joined a trade mission to Silicon Valley, and received mentoring on pricing from KPMG. “That made us think completely differently about pricing,” she enthuses.

Azoomee isn’t Estelle’s first business. She and her co-founder have already started, grown and sold a tech company. That success was enough to persuade her angel investors to follow her into this endeavour. “They had confidence in us,” says Estelle, “and were happy to invest in a socially responsible venture.”

As such, raising angel investment proved fairly straightforward this time around. Her angels then introduced her to additional funders.

Azoomee also attracted an environmentally friendly institutional investor, and raised £790,000 via Crowdcube (against a target of £450,000). Crowdfunding enabled Azoomee to market the product to an audience that includes many parents.

In all, the firm has secured £3.5 million of investment to date. The majority of this funding has been poured into developing the product and hiring tech talent. Azoomee is targeting a first major institutional funding round in 2018.

For Estelle, the key to successful fundraising is “finding a core network of investors that believe in you and your business.” Once you’ve found that, life becomes easier.

Of course, the experience gained from the previous start-up helped Azoomee’s founders. But that shouldn’t discourage first-time entrepreneurs, affirms Estelle.

“Right now, the investment climate is favourable. There are many investors out there who are keen to put money into growing businesses.”

Download this report, which looks at the more mature end of the funding journey and provides you with everything you need to know about later-stage financing and exit. It draws on the expertise of the mentors and delivery partners on the Mayor’s International Business Programme which helps London’s entrepreneurial businesses to accelerate their international growth.