UK labour market conditions remained challenging in November, according to the latest KPMG and REC, UK Report on Jobs. Recruitment consultancies signalled a further reduction in the number of people placed into permanent positions, while temp billings rose only slightly. Subdued hiring trends were widely linked to uncertainty surrounding the upcoming election and Brexit, which had reportedly led to many clients to delay or cancel hiring plans.

An uncertain outlook also weighed heavily on vacancies and candidate supply. Notably, demand for staff grew at the weakest pace for over a decade in November, while candidate numbers fell sharply overall. Pay pressures showed signs of softening, with both permanent and temporary pay rising at slower rates.

The number of people placed into permanent job roles fell for the ninth month running in November, albeit at the weakest rate since July. The reduction in permanent staff hiring was widely associated with heightened uncertainty around the outlook. Furthermore, growth in temp billings was only marginal. 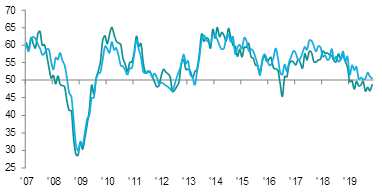 Growth of demand for staff at ten-year low

November saw the slowest increase in overall vacancies since the current upturn began in October 2009. The decline in the headline index was largely driven by a softer rise in demand for permanent staff, as temp vacancies expanded at a quicker pace. Nonetheless, rates of expansion remained historically subdued across both categories.

Slowest increase in starting pay since 2016

Latest data showed signs of a general easing in pay pressures midway through the final quarter of 2019. Permanent starting salaries increased at the slowest rate since December 2016, while temp wage inflation eased to a three-year low. Notably, both of the pay indicators fell below their long-run averages.

Recruiters widely commented that people were becoming increasingly reluctant to seek new roles due to uncertainty around the upcoming election and Brexit. Overall, candidate numbers fell at the quickest rate for five months, with permanent staff supply declining at a sharper pace than that seen for temp workers.

Nursing/Medical/Care saw the sharpest increase in demand for permanent staff in November, followed by IT & Computing and Blue Collar. Of the three monitored sectors to report lower vacancies, the Retail sector saw the quickest rate of contraction.

Temporary staff demand increased across six of the ten sectors monitored by the survey in November. The steepest increase in vacancies was signalled for Nursing/Medical/Care. Construction meanwhile saw a marked fall in demand for temp staff.

James Stewart, Vice Chair at KPMG said, “The uncertainty around the upcoming election and Brexit outcomes are playing havoc with the UK jobs market, as clearly employers and job-seekers are taking a wait and see approach before committing to growth or movement.

“However, as big business set out their strategies for the coming year, they will need to start making key decisions on hiring and investment, while those seeking new roles will be hoping to get their CV’s out in the New Year once the dust has settled.”

Neil Carberry, Recruitment & Employment Confederation chief executive said, “Today’s figures show exactly why this election needs to focus on work. The jobs market is still strong, but uncertainty is taking its toll. Permanent placements have now fallen for nine months in a row and vacancies growth is at its weakest for a decade. Any incoming government must move quickly to boost business confidence and implement policies that will help companies and individuals to make great work happen.

“With that in mind, it was good to hear Sajid Javid say that a Conservative government would review the planned changes to IR35 if they win the general election, alongside similar commitments from Labour and the Liberal Democrats. Everyone should pay the right amount of tax and that must mean thinking again and stopping 2020 implementation.

“Contractors and the self-employed are a vital part of the UK’s flexible labour market, and current implementation plans risk rewarding those who avoid tax whilst punishing hundreds of thousands of compliant contractors and agencies. It is essential that these tax changes are only brought in when it’s clear they can be implemented effectively, with proper regulation of umbrella companies and effective enforcement.”

Liz Truss looks certain to be next Tory leader as...

Half of Britons support an election taking place once the...