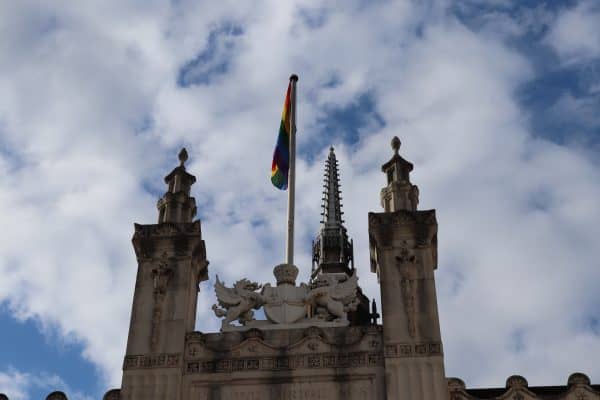 The instantly recognisable flag, which was created 40 years ago, will fly over Tower Bridge, the Barbican, Central Criminal Court, The Mansion House and Guildhall from 1 July to 7 July.

Staff and elected Members from the Square Mile’s governing body will join the Pride in London parade for the second time on Saturday 6 July as it continues a new tradition. Around 50 elected Members and staff will take part in the march through central London on Saturday 6 July, along with students from the City of London Corporation’s schools and academies. Representatives from the City of London Police and the City Corporation’s staff networks will also join the march to send a clear and very visible message of support for London and the UK’s LGBT+ communities.

“Flying the rainbow flag over iconic City landmarks reminds everyone of the importance of inclusivity, diversity, and acceptance in our society.

“As we take part in the pride parade for a second year running and start a new tradition, we celebrate the growing diversity in the Square Mile whilst also standing shoulder-to-shoulder with those working in our communities to tackle prejudice.

“The City of London Corporation is committed to serving and supporting London’s LGBT+ communities, and aspires to be a leader in diversity, equality and inclusion.”

“Pride is a hugely important event globally and I am delighted that we will see the rainbow Pride flag flying over iconic City landmarks.

“Together we are celebrating Pride In London and supporting the on-going fight for equality and inclusivity in this country and overseas.”

Over the last couple of years the City Corporation has taken action to be more representative of the communities it serves in the Square Mile and beyond.

The City of London Corporation hosts Pride in London’s Community Advisory Board, which holds its meetings at Guildhall.

The governing body for the Square Mile is currently signing up to become a Diversity Champion through Stonewall’s nationwide LGBT+ workplace inclusivity initiative.