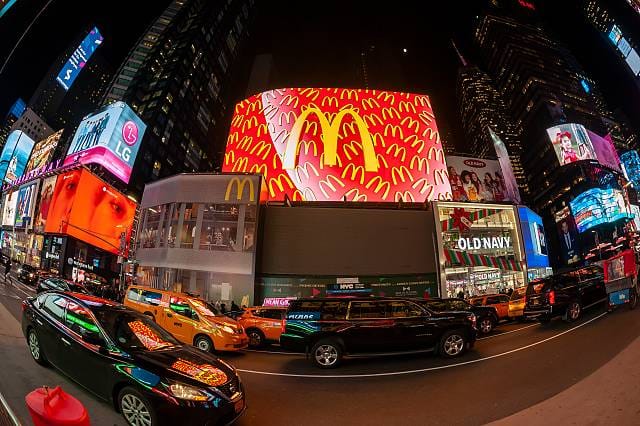 An independent economic report commissioned by McDonald’s to mark 45-years of operating in the UK, reveals the business and its suppliers have made a combined contribution of £518m annually to London.

Despite numerous high-street businesses in decline across the UK, McDonald’s continues to invest in and grow both its High Street and Drive-Thru operations, many of which are located in town centre locations.  Without including its supply chain, in 2017 alone, McDonald’s directly invested more than £278m in the city, employing 16,748 people.

The ‘Serving the UK: McDonald’s at 45’, was researched by Development Economics to understand the value McDonald’s has made to the UK economy, local communities, its employees, customers and suppliers since it first started operating in the UK. The new report builds on the economic data McDonald’s published five years ago to mark its 40th anniversary in the UK.

The report looks at McDonald’s significant contribution to UK’s cities, through jobs created in restaurants and the wider economic impact through its supply chain. The study details the many changes the business has undergone to meet customer needs and the key challenges it faces as it heads towards its 50th year in 2024.

Central London franchisee, Claude Abi-Gerges operates 29 restaurants in London. He said, “Creating and sustaining jobs across this part of London is of huge importance to me, and the fact that we have been able to make a significant financial contribution to the area is something my team and I are very proud of.

“We employ people based on their qualities not their qualifications but, as the worlds of business and education move closer, there’s no longer a need to decide between learning and earning.

“There’s also no such thing as a typical 9 to 5 at my restaurants. We know that people take a job with McDonald’s for all sorts of reasons, from wanting to earn some extra cash while studying at colleges or universities, to needing a flexible job that fits around childcare. That’s why it’s so important to us that we offer our employees flexible working options.”

Franchisees are going above and beyond to give back to and champion their local communities. Claude is a founding member of the Young Westminster Foundation, a cross-sector partnership that supports local youth groups and charities. His restaurants in Leicester Square and Shaftesbury Avenue are also amongst the first in London to receive ‘Best Bar None’ Gold accreditation in recognition of the positive impact they have on London’s night-time economy. Claude is always looking for new ways to help his local community and recently signed up with the TAP London campaign, allowing customers to use contactless payment technology to donate towards helping rough sleepers in the capital.

The report finds that overall the business and its supply chain is estimated to be worth £3.36bn annually to the UK economy, and that over the past 45-years, the total economic contribution is £54.4bn, spending £35.6bn with UK businesses and creating 2.1m jobs.

In London as a whole McDonald’s has contributed £278m and supported 16,748 jobs. By including suppliers and induced GVA, the total GVA contribution in London is £518m.