Home Breaking News Kremlin ‘absolutely’ supports Belgrade and fires a warning shot at NATO they will ‘supply weapons, if the Serbs turn to us’ 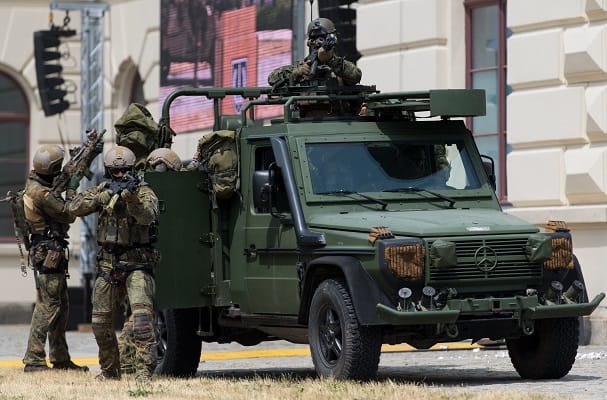 The Kremlin are supporting Belgrade, following worrying developments out of Kosovo and Serbia over the weekend after Belgrade warned that they could start the “denazification of the Balkans.”

Tensions have flared, with concerns Vladimir Putin is ‘aiming to expand conflict” by making the situation worse between the ethnic divisions between Croats, Bosniaks, and Serbs.

On Monday the Kremlin said they “absolutely” supports Serbia, and the presidential spokesman Dmitry Peskov said, “We are next [to] the Kosovo Serbs, we believe these are absolutely unreasonable demands.”

Moscow supports the position of Belgrade, after Serbia’s president, Aleksanr Vucic, and the Kremlin spokesman said, “We, of course, absolutely support Serbia.

“We stand by the Kosovo Serbs. We believe that these (demands of the Kosovo authorities – TASS) are absolutely unreasonable demands.”

Peskov added, “Of course, we believe that those countries that have recognised Kosovo and are guarantors should use all their influence to warn the Kosovo authorities against taking any ill-considered steps that could lead to further escalation.”

Russian Federation Council member Vladimir Dzhabarov told state-run RIA News that “in case of an aggravation of the situation around Serbia, Russia will assist Belgrade without directly participating in the conflict.”

He added, “Help can be even if it is necessary to supply some weapons, if the Serbs turn to us.”

The Kremlin spokesman added, “Now, thank God, we managed to avoid some aggravation overnight, but this situation is only postponed for one month, so it is very important to show prudence on all sides all the same.

“We support the peace-loving, constructive position [of Belgrade] in this context, and the calls for peace and constructivism which were voiced by the Serbian president.”

Last week Kosovo’s President Vjosa Osmani said she believes Putin could be seeking to use Kosovo as a means for the Kremlin to widening their conflict while destabilising the continent.

“Putin’s aim is to expand the conflict in other parts of the world,” she said.

“Since his aim has constantly been to destabilise Europe, we can expect that one of his targets might be the Western Balkans.”

The radical leader of pro-Serbian factions, Milorad Dodik, triggered a political crisis when he withdrew his party from national institutions which experts believe Putin has also been working with Serbia there to exacerbate ethnic divisions between Croats, Bosniaks, and Serbs.

The NATO-led mission in Kosovo also said on Sunday that they are monitoring the “tense” situation in the northern region and they are “prepared to intervene if stability is jeopardised.”