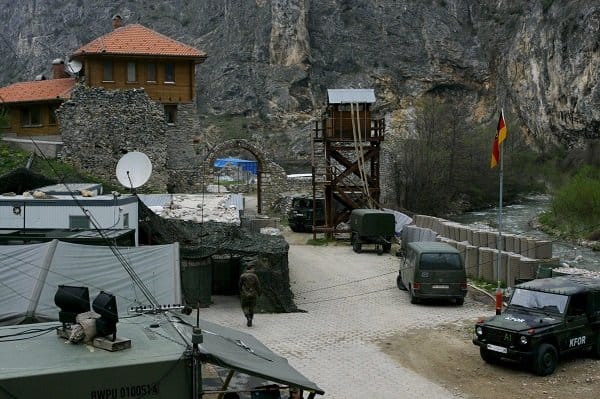 Worrying developments have hit the Balkans over the weekend as the Kosovan government are accusing Serbia of trying to destabilise the country, and the Serbs could start the “denazification of the Balkans” and NATO has warned they are “prepared to intervene” in South East Europe.

Tensions have flared up as ethnic Serbs blockaded roads over a dispute of vehicle licence plates and identity cards.

Kosovan officials have restarted the practice that vehicles entering Kosovo from Serbia must replace their licence plates with that of the country, then upon returning the Serbs have to reverse the number plates.

Kosovo has been accused of planning to prevent ethnic Serb minority from using Serbian identity cards which saw many “aggressive acts” of protests on Sunday and on Monday the Kosovan government started to issue extra documents for them to cross in to their territory.

Kosovo was part of Serbia until an armed uprising started in 1998 to 1999 by the territory’s ethnic Albanian majority started a horrific and bloody crackdown by Serbs.

NATO ended the war after an aerial bombing campaign to forced Serbia’s troops out of Kosovo, since then Serbia has refused to recognise the declaration of independence in 2008.

The Russian President Vladimir Putin also backed this and has always expressed Moscow’s support, which could see him “expand conflict” into South East Europe.

“Vucic and (Petar) Petkovic are the main responsible persons for the riots,” Kurti wrote in Facebook.

Osmani  wrote on Facebook that “Vucic’s efforts to destabilize Kosovo” will fail.

An MP from Vucic’s ruling party said Serbia would need to begin the “denazification of the Balkans” – using identical language to that of the Kremlin, which was Putin’s justification for its invasion of Ukraine.

Last week Osmani said she believes Putin could be seeking to use Kosovo as a means for the Kremlin to widening their conflict while destabilising the continent.

“Putin’s aim is to expand the conflict in other parts of the world,” she said.

“Since his aim has constantly been to destabilise Europe, we can expect that one of his targets might be the Western Balkans.”

The radical leader of pro-Serbian factions, Milorad Dodik, triggered a political crisis when he withdrew his party from national institutions which experts believe Putin has also been working with Serbia there to exacerbate ethnic divisions between Croats, Bosniaks, and Serbs.

The NATO-led mission in Kosovo also said on Sunday that they are monitoring the “tense” situation in the northern region and they are “prepared to intervene if stability is jeopardised.”

Kosovan officials have now agreed that new regulations will be postponed for 30 days once barricades set up at border crossings by ethnics Serbs in Kosovo were removed.

“Following this, the Kosovo government has given a pledge to postpone the implementation of the two decisions dated June 29, 2022, until September 1, 2022…from the moment when all barricades are removed and full freedom of movement is established on all roads in northern Kosovo.”