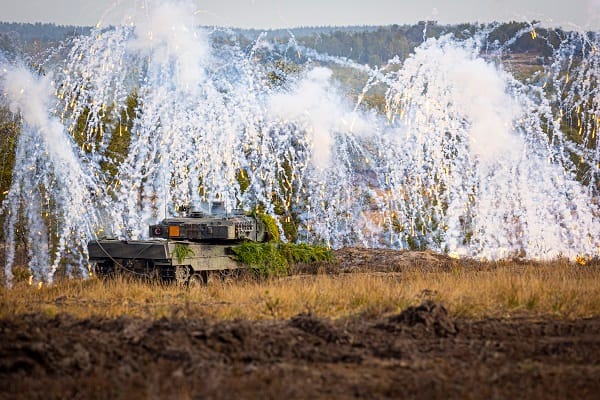 Germany and NATO are to send around 200 main battle tanks to Ukraine which will deliver a crushing blow to Vladimir Putin and his forces.

Germany has agreed on Wednesday to send their deadly Leopard 2 tanks, along with Poland, Spain, Norway and the US could be set to send their M1 Abrams to Ukraine.

Chancellor Olaf Scholz said in Berlin on Wednesday morning, “This decision follows our well-known line of supporting Ukraine to the best of our ability.

“We are acting in a closely coordinated manner internationally.”

“This is what is going to become a real punching fist of democracy against the autocracy from the bog.”

The British Prime Minister Rishi Sunak said that Berlin has made the “right decision” in sending tanks as this will “strengthen Ukraine’s defensive power.”

Sunak tweeted, “The right decision by NATO Allies and friends to send main
battle tanks to Ukraine. Alongside Challenger 2s, they will strengthen Ukraine’s defensive firepower.

“Together, we are accelerating our efforts to ensure Ukraine wins this war and secures a lasting peace.”

The Polish Prime Minister Mateusz Morawiecki thanked Scholz and tweeted, “The decision to send Leopards to Ukraine is a big step towards stopping Russia.”

Kyiv based military researcher Kirill Mikhailov told The Daily Telegraph, that the delivery of the tanks could “change the course of the war.”

He said, “We’ve already passed the end of the beginning.

“What you need now is to be able to replenish the Ukrainians to the point where the Russians will constantly be on the retreat.”

The Russian ambassador to the US Anatoly Antonov accused both Washington and Berlin of a “blatant provocation.”

He said, “It is obvious that Washington is purposefully trying to inflict a strategic defeat on us.

“If the United States decides to supply tanks, then justifying such a step with arguments about ‘defensive weapons’ will definitely not work.