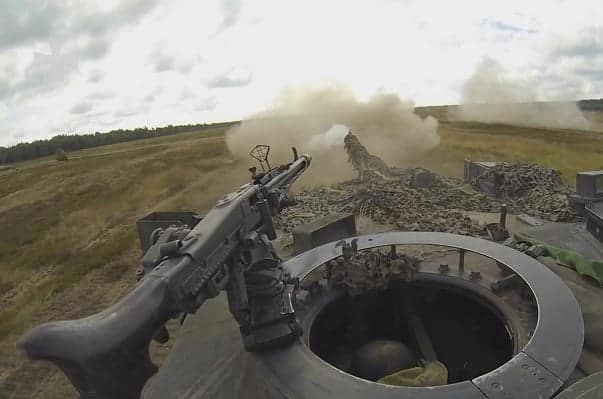 Vladimir Putin’s voice has raged at Berlin for sending tanks to Kyiv calling them “Nazi scumbags” who are the “b****rds”  which “have nurtured the Nazi Ukrainian regime” for eight years.

Germany and NATO will send around 200 main battle tanks to the frontline in Ukraine punch through Russian forces and push them.

Germany has agreed on Wednesday to send their deadly Leopard 2 tanks, along with Poland, Spain, Norway and the US could be set to send their M1 Abrams to Ukraine.

This has enraged Kremlin officials and reacting to the news Vladimir Solovyov who is a close ally of Putin has called on Moscow to consider attacking “German territory” and “military bases” for sending the Leopard 2 tanks.

This is the first time German tanks have been in active service in Europe since World War Two and they will provide Ukraine with immense firepower which will be able to break through Russian defensive lines.

Solovyov who has been dubbed “Putin’s voice” said during his show, an “Evening with Vladimir Solovyov,” the propagandist raged, “I think it’s time to send a clear, resolute message that we consider Germany a party to the conflict and that German tanks appearing in Ukraine will definitely lead us to considering Germany territory, military bases and other sites to be legitimate targets.

“NATO wants to fight in this cunning way, pretending that it’s not fighting. In your dreams.”

Previously he has called on the death penalty for Russian soldiers who have failed to achieve their military objectives, described Germany’s Defence Minister Boris Pistorius as “cretin who led Germany to ending up as a zone of direct destruction.”

Solovyov continued with his weekly rant at the West and added, “We’re the aggressor? For eight years you b****rds have nurtured the Nazi Ukrainian regime.

“For eight years you’ve been killing the people of Donbas…

“But what are you posing as now? You European Pharisees, you Nazi scumbags.”

He then urged for Moscow to consider carrying out strikes on Germany so their citizens “know which new Nazi leaders they’ve raised and brought to power.”

The Kremlin’s spokesman Dmitry Peskov warned Berlin against sending the Leopard 2 tanks to Ukraine as this will “leave an inevitable imprint.”

Peskov said, “There is no substantial dialogue between the Russian Federation and Germany.

“The possible delivery of tanks to Kyiv does not bode well for future relations between the two countries.

“Relations are already at a low point.”

The Kremlin has also warned that Ukraine will “pay the price” if tanks are sent to Kyiv from the West and NATO along with further military aid.

The Russian ambassador to the US Anatoly Antonov accused both Washington and Berlin of a “blatant provocation.”

He said, “It is obvious that Washington is purposefully trying to inflict a strategic defeat on us.

“If the United States decides to supply tanks, then justifying such a step with arguments about ‘defensive weapons’ will definitely not work.