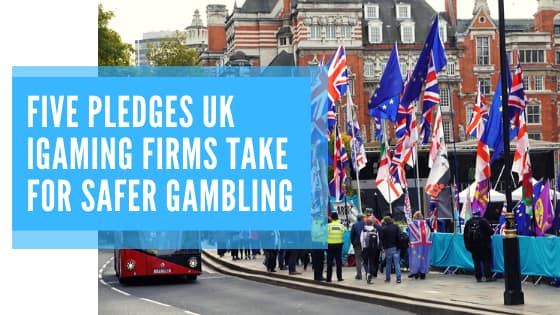 The UK gambling industry has developed five gambling pledges due to the rising challenges of safety in the sector and provider’s attempts to avoid new regulations imposed on them. Leading gambling firms have come up with these safer gambling commitments to raise funds for gambling addiction treatment and research.

iGaming companies initiate promotion of safer gambling in the UK

The UK Gaming Commission released statistics and voiced concern with  iGaming in recent years. The main concern centres around the industry not being able to provide support and help for people who struggle with gambling addiction. No doubt, there are addicted gamblers, who are also called problem gamblers.

Today, there are over 2 million problem gamblers and addicted gamblers in the UK. Not only adults have been affected, but minors as well. It is a problem that needs to be curbed using effective strategies.

In a bid to help this situation, five of the UK’s best-known gambling groups decided to take responsibility. These companies are Microgaming (bet365), GVC Holdings, Flutter Entertainment, William Plc, and Sky Betting and Gaming. All these companies run iGaming online and offline. As long as online iGaming becomes the most popular way to play, the issue goes far beyond the UK. Although most online free games such as demo slots on https://pokiesman.com/ are regulated and confirmed to be fair and trusted, most customers admit being absorbed with gameplay.

There is a similar issue with video gaming but it has not attracted captious attention yet. Therefore, all five iGaming companies decided to take action and came together to make sure a safer gambling environment is achieved. GVC Holdings owners endorsed the commitments as “the most comprehensive set of measures from a wide group of leaders across the sector to support the UK Gambling Commission’s national strategy to reduce gambling harms.” Source: The Guardian

These five safer gambling pledges are:

For years, betting companies were criticised both by the media and politicians because voluntary levy contributions were always below £10 million. It is not up to the expectations of UKGC. Also, companies in the iGaming industry haven’t done much in following rules set by the commission in advertising and marketing. They reach a broad audience through broadcast, which has not helped the situation at hand.

However, they begin to take responsibility for the impact they brought to society. It is one of the reasons why the pledges were made. Commitments were signed by CEOs of the companies mentioned earlier, like Peter Jackson, owner of Flutter Entertainment. In the latest interview, he admitted that with these commitments, it would be possible to foster a safer gambling environment for UK citizens. He said, ‘These commitments are an important step forward for the sector in their own right and also signal a genuine desire to ensure that acting responsibly is at the heart of our respective businesses.’ Source: BusinessLive. Other signatories were made by Aspers, Caesars, Genting, Rank Group, Playtech.

Due to a recent announcement, gambling providers leisurely implement safer rules, but no significant steps were made regarding the pledges made by these companies. The dispute against problem gambling and other related threats has not only skyrocketed but also affected a lot of people in a short amount of time. Indeed, the situation has been worsened by both the industry and governing bodies.

Tom Watson, Labour Deputy leader, addressed an audience that the UK should tackle not only problem gambling but also change its culture. He added that a mandatory charge for the iGaming industry should be added to the UK gambling and regulatory bodies. It is essential to improve the way funds made audits and also distribute contributions to the health sector.

With all these, it would be impossible for gambling companies to back out of their pledges to ensure a safe environment. They have their interest to cooperate and follow the announced commitments to provide the market won’t be hit with more restrictions soon. MPs from the cross-party group on gambling-related risk joined the successful campaign by giving advise that all stakes on fixed-odds should be below £2bn a year, including online commitment like slots. This news ended up with the dramatic drop of shares of UK gambling firms; they lost about £1.2bn in value in one week.

Beyond doubt, these laws and regulations will significantly affect gambling operators in the UK and the whole of Europe eventually. Until these laws start to be followed, both the UK government and iGaming companies will not reach a compromise.