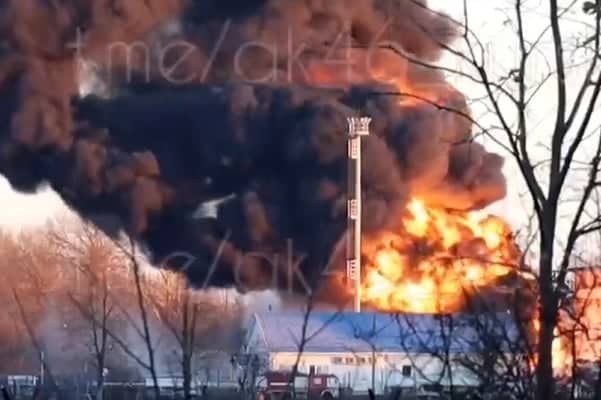 Explosions have rocked Vladimir Putin’s airbases deep inside Russia and that if Moscow finds the attacks were deliberate, “it will probably consider them as some of the most strategically significant failures of force protection since its invasion of Ukraine,” British Military intelligence has said.

Kursk airport, Dyagilyaevo and Engels 2 airbase, south east of Moscow, which are used to launch cruise missiles and a launch pad for bombers to take off and attack Ukraine have all been under attack with fierce explosions seen.

The British Ministry of Defence (MoD) warned that the Kremlin may “impose severe sanctions on Russian officers deemed responsible for allowing the incidents” which took place deep inside Russia territory.

The MoD said that the attacks at the military sites were “much deeper inside Russia” than previous explosions, which the causes have not been confirmed.

The Russian Ministry of Defence has said that Ukrainian forces could have now crossed over the border into Russia.

Ukrainian Presidential Advisor Mikhail Podolyak tweeted that “if something is launched into other countries’ airspace, sooner or later unknown flying objects will return to departure point,” in a warning to the Kremlin.

The attacks have caused panic among Russian military bloggers have reported that the attacks shows that Ukrainian forces have now crossed into the Russian Federation who have “already reached the banks of Volga,” which is the river that flows near to Moscow.

In Russia tonight there was a new attack by an unknown drone on the Khalino military airfield in Kursk. As a result of the attack, an oil reservoir near the airport caught fire. pic.twitter.com/d14c1PJW1N

Military blogger Readovka wrote on Telegram, “With a high degree of probability, the drone worked from our territory, which means that enemy DRGs have already reached the banks of the Volga.

On Monday two long range bombers have been previously used to blow up energy networks across Ukraine and there was also another attack at the Russian military base on the city of Ryazan leaving three dead after a fuel truck blew up.

They reported, “With a high degree of probability, the drone [was launched] from our territory, which means that enemy [operatives] have already reached the banks of the Volga River.

“If the drone came from Ukraine, then our enemy already has technology with a range of 1000 km, which means that Moscow could be under attack.

“There is only one conclusion: counter-terrorism measures on the territory of the Russian Federation should be strengthened to the maximum, retaliation strikes should be continued tenfold.

“Until the Russian response has a massive effect, such attacks will continue.”m