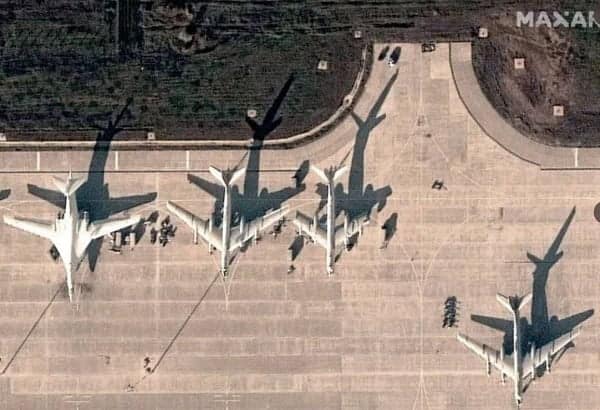 Ukraine has reportedly attacked a key Russian airbase which has left two Tu-95 nuclear capable bombers damaged at Engels 2 near the Russian city of Saratov on Monday.

The two long range bombers have been previously used to blow up energy networks across Ukraine and there was also another attack at the Russian military base on the city of Ryazan leaving three dead after a fuel truck blew up.

It is most likely Ukraine used a drone to attack the airbase and Ryazan which are between 300 and 450 miles from the Ukrainian border.

They reported, “With a high degree of probability, the drone [was launched] from our territory, which means that enemy [operatives] have already reached the banks of the Volga River.

“If the drone came from Ukraine, then our enemy already has technology with a range of 1000 km, which means that Moscow could be under attack.

“There is only one conclusion: counter-terrorism measures on the territory of the Russian Federation should be strengthened to the maximum, retaliation strikes should be continued tenfold.

“Until the Russian response has a massive effect, such attacks will continue.”

There have been fears that Vladimir Putin is preparing for an “imminent large scale” on Ukraine as nuclear capable bombers have been seen “on the tarmac.”

Experts warned last week that an “unusually high number of bombers” were detected at the Russian military air-base, Engels-2.

Almost 24 long range Tu-95 and Tu-160 are being prepared according to satellite images in the city of Saratov which shows there is an “increase in operations.”

Military analyst Arda Mevlutoğlu told the German outlet, SPIEGEL that there has been an increase in tanks and bombers at the Russian air-base which could indicate another new “imminent” attack.

He warned, “The unusually high number of bombers on the tarmac is an indication of an increase in operations, if not an imminent large-scale attack.”

Professor Michael Clarke, the former director-general of RUSI, told Sky News on Tuesday, “It looks as though Russians are preparing some big air attacks.

“There’s a lot of Twitter chat and satellite imagery at air bases… so there may be a lot of air activity.”