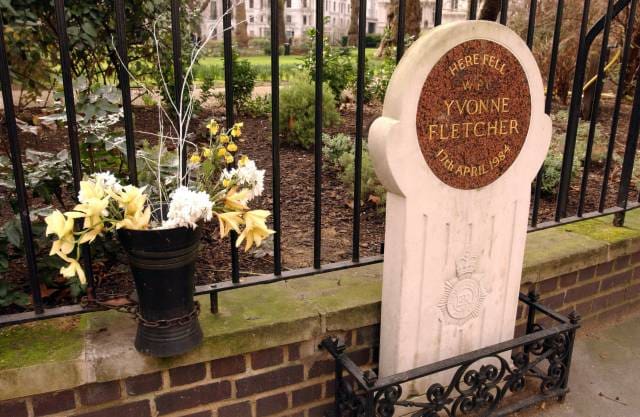 PC Fletcher, 25 was fatally shot as she policed a demonstration that took place against Colonel Gaddafi, 33-years ago, on 17 April 1984 outside the Libyan Peoples Bureau at St. James’s Square.

Former Libyan education minister, Saleh Ibrahim Mabrouk was arrested in 2015 on suspicion of conspiracy to murder.

Mabrouk who lives in the UK was told by Scotland Yard the case against him is dropped despite there being sufficient evidence against him.

Police officers who investigated the murder know who is responsible but they have been blocked by MI5 from using evidence in court, citing “national security” concerns.

John Murray who is a former police officer and colleague of PC Fletcher who cradled her as she was on lying in the road dying, said to the The Daily Telegraph, that this is “absolutely horrendous” and “perverse.”

Murray said to the newspaper he was informed by Scotland Yard “vital evidence has been withheld under the guise of national security.”

“That is absolutely horrendous. If that is not a perverse use of the law, I think there is something wrong.”

A statement by Scotland Yard read: “We believe our investigation has identified enough material to identify those responsible for WPc Fletcher’s murder if it could be presented to a court.”

“However, the key material has not been made available for use in court in evidential form for reasons of national security.”

“Although our investigation has always remained open, cases like this do become harder to solve over time.”

“Our judgment is that this concludes what was by far the best opportunity to solve this tragic case and provide a degree of closure for the victims and their families. This investigation will never be closed, but the likelihood of finding further evidence, in Libya or elsewhere, is low.”

The Home Office has been blamed by police sources for blocking the prosecution.

Home secretary, Amber Rudd said: “I cannot comment on the details of this case.”

“I would however like to acknowledge the hard work and commitment the Metropolitan Police have shown over a prolonged period of time to bring to justice those involved in the murder of WPc Yvonne Fletcher.”

“WPc Fletcher was one of their own. Her murder remains as shocking and senseless as the day it occurred and I understand that the decision will be deeply disappointing and frustrating for all her family, friends and colleagues.”

The family of PC Fletcher said in a statement: “We understand that some available evidence could not be used in court but are satisfied that the Metropolitan Police has left no stone unturned in its pursuit of justice in Yvonne’s case.”

“We are deeply disappointed and frustrated that a prosecution cannot proceed at this time. We had hoped that the latest turn of events would finally lead to some closure for the family.”