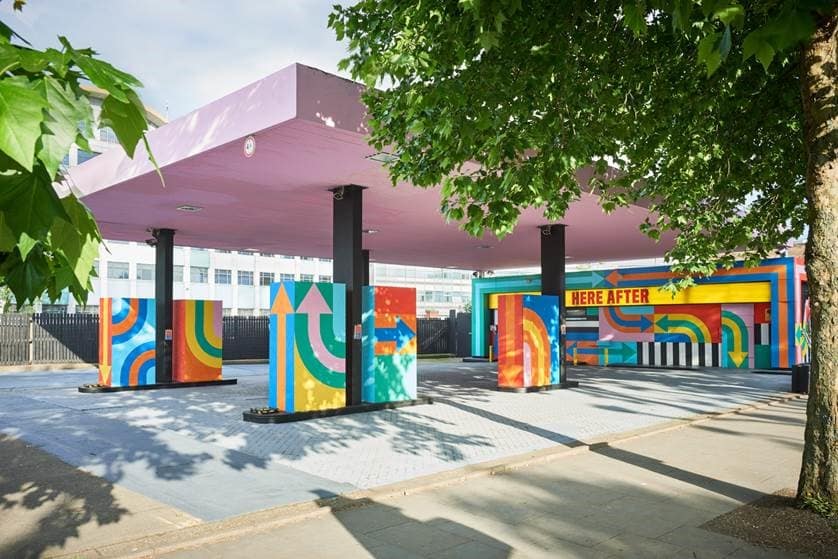 Designers Craig & Karl have playfully revived a derelict petrol station on Wood Lane in London’s White City to create HERE AFTER, a public and visually arresting art installation that riffs on the area’s importance to British broadcasting history. However, it was painted by Global Street Art.

Adapting the bright hues of a television test card, the colourful design nods to the petrol station’s location directly between Television Centre, the BBC’s former headquarters, and White City Place, the former BBC Media Village, both of which reopen this year following extensive redevelopment.

HERE AFTER gives the site a new life by twisting the appearance of commonplace petrol stations and patching together the mishmash of striped forms and colours found in major fuel companies’ branding. In an almost chaotic fashion, the site reinvents itself from the fragments of its past.

Vibrant, striped sections of painted colour wind and bend around the petrol station site, leading passers-by and visitors to discover the space’s ‘hereafter’, suggesting a place to meet or something yet to come.

HERE AFTER is the international design duo’s first major public artwork in London.

The project is the first stage in a regenerative scheme for the petrol station, which will soon have a new life as a venue for pop-up events, while White City is undergoing an £8 billion decade-long regeneration that will see the formation of a thriving creative neighbourhood.

Craig & Karl say on the project, “We view this project as the petrol station’s second life, or ‘wonder years’, which led us to use the words ‘Here After’ as a reference to heaven or utopia. Now that the petrol station has fulfilled its duty, so to speak, it’s free to enjoy itself.”

Alistair Shaw, managing director of Television Centre, said, “Craig & Karl’s design speaks to the fact that Television Centre and White City Place developments should look forward to the future as well as embracing the area’s rich heritage. We expect that this artwork will become a real draw, as well as a point of pride for the local community; a very public demonstration of the positive change coming to White City.”