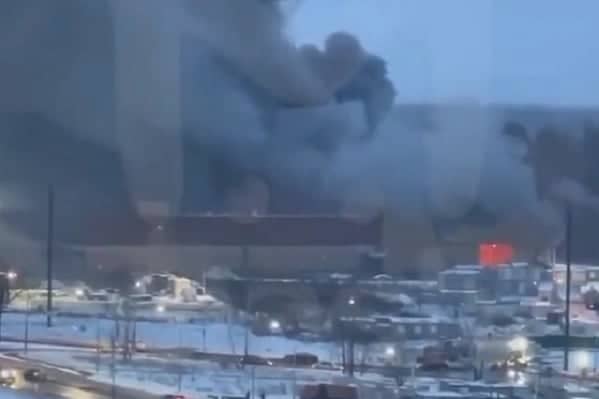 On Monday the Stroypark shopping centre in the Balashikha, Moscow region was engulfed in flames and thick black smoke could be seen over Russia’s capital.

Russian officials could be seen being escorted away from the fire into another part of the shopping centre for safety.

It was reported that the fire was around 500 square metres in size and more than 60 firefighter attended the scene.

The press service of the administration of the urban district of Balashikha, said that workers in the building were quickly “evacuated.”

The Ministry of Emergency Situations said that at 08.33am local time (5.33am GMT) the fire was recorded after the “operational-duty shift” and they had received an urgent call from the shopping centre.

An official press release from the Ministry of the Russian Federation claimed that the “burning of garbage” was the cause.

It read, “At the time of the arrival of the first fire and rescue unit, burning of garbage was observed in an open area covering an area of ​​200 sq.m.

“Further information is being specified.

"Stroypark" shopping center located located in the city of Balashikha in the Moscow Oblast of Russia is on fire. pic.twitter.com/eGlR9N7lZn

On Thursday last week the OBI superstore at the Mega Khimki mall was ablaze in north east of Moscow.

That fire covered an area of 18,000 square metres at one point which was then reduced to 7,000 after firefighters battled for hours to contain the fire.