Home Business News An armada of warships, troops and submarines mobilise sparking fears of a fresh assault in Ukraine and ‘possibly Moldova’ 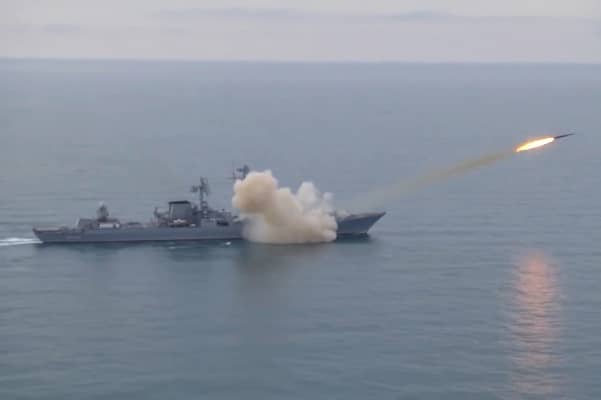 An armada of warships loaded with troops and submarines carrying cruise missiles have been mobilised in the Black Sea.

A Russian expert has said that at least six warships, two assault vessels full of soldiers make up the armada which are combat ready could signal a fresh attack on Ukraine and they could try to form a land bridge in the breakaway state of Transdnistria which borders Moldova.

Moscow’s largest amphibious assault ship, the Pyotr Morgunov landing vessel is also part of the armada which could suggest a land assault.

A Russian expert told the Daily Mirror, “This maritime surge seems highly unusual and could suggest a change in tempo in the war, possibly involving Moldova.

“Any opening of a new front would put immense pressure on the West as it tries to get supplies and large military equipment to the frontline.

“There has always been the possibility of an assault up the Dniester and the landing craft could be covered or protected by the submarines.

“Or the deployment may mean the submarines will launch large numbers of missile attacks on mainland Ukraine.

“There have been a lot of supply missions undertaken by Russian navy warships since the attack on the Kerch Bridge.

“But the inclusion of so many submarines’ points to this being much more than a supply mission.

“There is an outside chance that navy commanders are preparing their crews for a future operation or trying to protect key ships against an attack by Ukraine.”

Other experts have suggested that Moscow have moved the fleet to prevent Ukrainian forces to target ships in the Black Sea using long range missiles.