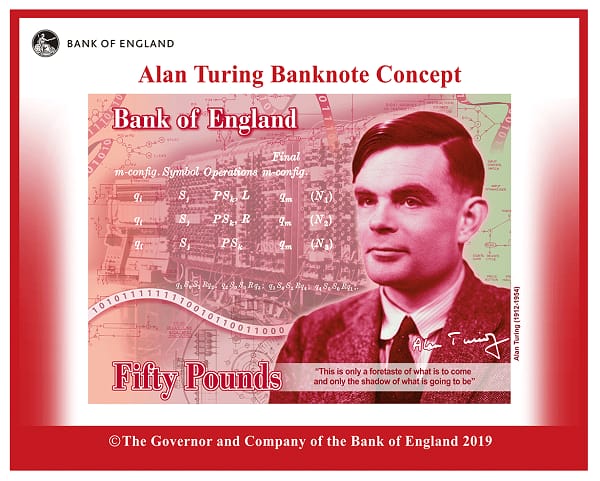 Alan Turing to be the face of new polymer £50 note

The Bank of England (BoE) Governor, Mark Carney has announced on Monday that Alan Turing will appear on the new £50 polymer note. Making the announcement at the Science and Industry Museum in Manchester, the Governor also revealed the imagery depicting Alan Turing and his work that will be used for the reverse of the note. The new polymer £50 note is expected to enter circulation by the end of 2021.

Alan Turing was chosen following the Bank’s character selection process including advice from scientific experts. In 2018, the Banknote Character Advisory Committee chose to celebrate the field of science on the £50 note and this was followed by a six-week public nomination period. The Bank received a total of 227,299 nominations, covering 989 eligible characters. The Committee considered all the nominations before deciding on a shortlist of 12options, which were put to the Governor for him to make the final decision.

Mark Carney, Governor of the Bank of England said, “Alan Turing was an outstanding mathematician whose work has had an enormous impact on how we live today. As the father of computer science and artificial intelligence, as well as war hero, Alan Turing’s contributions were far ranging and path breaking. Turing is a giant on whose shoulders so many now stand.”

Alan Turing provided the theoretical underpinnings for the modern computer. While best known for his work devising code-breaking machines during WWII, Turing played a pivotal role in the development of early computers first at the National Physical Laboratory and later at the University of Manchester.

He set the foundations for work on artificial intelligence by considering the question of whether machines could think. Turing was homosexual and was posthumously pardoned by the Queen having been convicted of gross indecency for his relationship with a man. His legacy continues to have an impact on both science and society today.

Sarah John, Chief Cashier said, “The strength of the shortlist is testament to the UK’s incredible scientific contribution. The breadth of individuals and achievements reflects the huge range of nominations we received for this note and I would to thank the public for all their suggestions of scientists we could celebrate.”

Where are ISA millionaires putting their money?

The best and worst investment strategies of the last 10...