Home Business NewsBusiness Zombie businesses don't need killing, they can be nursed back to health 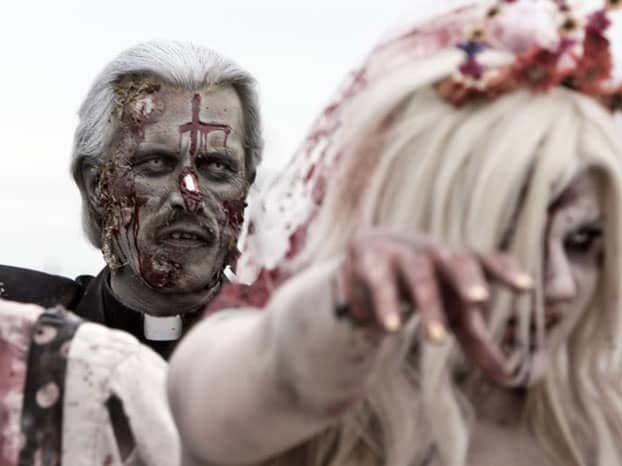 Zombie businesses don't need killing, they can be nursed back to health

Turnaround specialists revive the living dead. Christine Elliott, chief executive of the Institute for Turnaround, explains what you can learn from them

These are busy times for the Institute of Turnaround members. Zombie firms are lurching around, too mired in debt to prosper, but not quite ill enough to die.

It’s the job of our members to deal with these zombies. Just when they decide to smash their own zombie firm over the head with a shovel, we arrive with advice and hands-on help to drag their business back to the land of the living.

So what do I mean by a zombie?

These are firms which are unable to pay back the principal on their debts. They are ticking over by making interest payments and selling assets to prolong their lives but for diminishing returns.

One national accountancy firm has estimated there may be as many as 100,000 zombie companies in the UK.

Our Institute for Turnaround research not only shows there are now thousands of these companies across the UK, but they are staying in that state for longer than ever before.

The banking crisis is an ideal environment for breeding zombies.

Scarce liquidity has caused this balance-sheet recession, with banks “pretending and extending” loans and triggering repeat rounds of financial restructuring. This merry-go-round can provide a temporary watershed but does not tackle the underlying operational issues in the business.

Survival is easier than in other recessions: interest rates are negligible (not in the mid-to-high teens, as previously) and HMRC has mostly been benign.

The result is a legion of firms held in the clutches of owners who hold the economic interest but who lack the resources to invest and the ability to give them a route to growth and prosperity.

Is it possible, then, to reverse the zombie company condition? Thankfully, the answer is ‘yes’, though not always.

There is no easy route to effect a turnaround, but the formula for success need not be complicated or even reliant on huge wodges of funding.

The tactics used by our members can be used by all businesses.

Let me reveal our five-step process:

How can you fix something without knowing how big the problem is? It’s normal to avoid being truly honest about how serious the situation is. The first step is to ditch the euphemisms and false optimism. For example, moving numbers around on a balance sheet will paper over the cracks, but it won’t hide more fundamental problems, like a lack of cash.

Every business needs to understand its cashflow. The best way to do so is to have an accurate, 13 week rolling cashflow forecast.

Why 13 weeks? Over that time, overheads and sales (that translate into cash) should be relatively easy to predict. Rolling means that you update the cash position every week and so, unlike many businesses, you have three months’ notice of what’s up ahead putting you on the front foot. Much of the information can be gathered by looking at bank statements, purchase orders (a necessary discipline) and invoices.

Most business owners should be able to construct a simple weekly cashflow without needing an accountant – you can use Microsoft Excel to do this. In manufacturing, the time from sale through production is when cash is unavailable; otherwise known as working capital. A cashflow forecast is more likely to be inaccurate on sales forecasting rather than overheads, so it’s vital you get a grip on quotations and ask: What percentage of them are likely to convert to order? How long will an order take to be produced? And how long will it take for clients to pay?

Cyclical markets (retail for example) should be able to compare with what happened at the same time last year and in similar market conditions.

Step 3: Raise the cash you need

There are many ways to generate cash such as renegotiating contract terms, or becoming efficient at tracking and chasing debtors. Invoice discounting is a solution in some cases. By the way, failing to pay HMRC, which has become much more efficient at tracking multiple tax liabilities, is not a smart idea. You need to know how your bankers and financiers will be thinking – don’t stop communicating with them and do provide timely management information. Understand which of your customers and clients are truly profitable – the answers may be surprising.

Usually the people working in the business will:

a) know something is wrong

b) have a good idea how to fix it.

So the first priority is listening to what everyone on the team has to say. Filter out the personal agendas and work out the handful of changes that will make a difference to how the company performs. This takes skill and experience and conflict and blame should be avoided. With all the main players together, there’s no hiding place or covering up with excuses.

This is why turnaround professionals often gather people in a room, with an agenda, and keep them there till the answers are found!

You should be able to summarise the new plan on one side of A4. Of course there will be detail behind that, but if you can’t quickly sum up what you are trying to do, you haven’t got the right plan. Communication and openness are essential factors. Buy-in can’t be achieved without rapidly building trust and co-operation. Every staff member should understand what they can do to assist the turnaround.

Uncertainty creates fear. One way of dealing with it is to list and share the problems facing the organisation – there’s often a way to solve problems but one person is unlikely to have all the answers. Make the information visible, charts can work well. Week by week, record and show your progress. As you do so, confidence will rise.

Step 5: Sort out the leadership

The leadership skills needed for a business in distress are often different to those needed when things are going well, and employing the best people at the right time, for the right job, is vital.

Tragically, businesses can become paralysed by a sense of fear and failure and they may stop making decisions. As a rule of thumb, in turnaround, if you’re getting more than 90% of the decisions right, you probably aren’t moving fast enough. Identify a few quick wins that start to make people feel better about the company and its prospects. Share positive feedback from customers. Celebrate a quality threshold met or a new order. Keep the meetings short and focused. Action is a great antidote for hopelessness.

Follow this five step process and you’ll be amazed at what can be achieved.

Let me give you two examples of award-winning cases where members of the Institute for Turnaround have worked their magic.

Wyke Farms is a long established traditional British business that faced up to, and overcame, significant trading challenges in volatile market conditions. They did this by developing and implementing a ‘Fit for the Future’ structured plan and ethos where no part of the business escaped attention.

The results have been outstanding. Wyke is in great financial health now, generating good returns for the shareholders, providing stability of employment locally and able to invest in new staff and machinery as sales grow. Wyke has retained its position as the largest family-owned premium branded cheddar producer in Britain.

In 2007 and 2008, the firm issued profit warnings, followed by announcing losses of £16m and £27m respectively. The following year, the company was restructured and the turnaround began by recognising its ineffective governance and internal corporate cultural problems. Loss-making operations were closed and the focus turned to working capital and debt reduction.
The results include a return to profit in 2010, with 9% growth in sales and a 46% growth in profit for 2011.

Challenged businesses:take heart! With a strong brand, the right management team, good advice and a good turnaround plan, there’s every chance that some of the companies that are zombies today could be thriving in years to come.

Christine Elliott is the Chief Executive of the Institute for Turnaround, a leading professional body in Britain and Europe for turnaround and transformation leaders

Jon Moulton on Vince Cable, how to rescue failing companies, and that Liam Fox debacle

Managing cashflow: Why you should consider invoice finance

National Loan Guarantee Scheme: Everything you need to know, answered