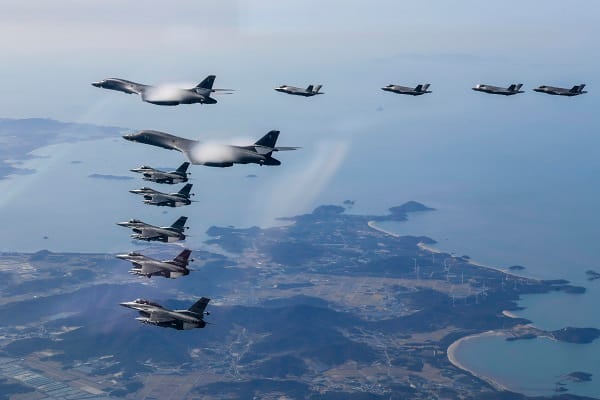 Following Pyongyang’s ICBM missile test the US said the military drills demonstrates there is an “iron-clad” security commitment to defend South Korea.

US National Security Council spokesperson, Adrienne Watson, said the White House are very much committed to taking “all necessary measures” to protect their allies.

Japan’s defence minister, Yasukazu Hamada warned that North Korea’s ICBM “could cover the entire mainland United States” which has a range of up to 15,000 kilometres.

North Korea said the ICBM is a “reliable and maximum-capacity” weapon designed to contain any and all military threats from their enemies.

The North’s Korean Central News Agency (KCNA) said the missile was fired from Pyongyang International Airport travelled and flew 1,000km and then landed in international waters.

KCNA said, “The test-fire clearly proved the reliability of the new major strategic weapon system to be representative of (North Korea’s) strategic forces and its powerful combat performance as the strongest strategic weapon in the world.

“Kim Jong Un solemnly declared that if the enemies continue to pose threats to [North Korea], frequently introducing nuclear strike means, our party and government will resolutely react to nukes with nuclear weapons and to total confrontation with all-out confrontation.”