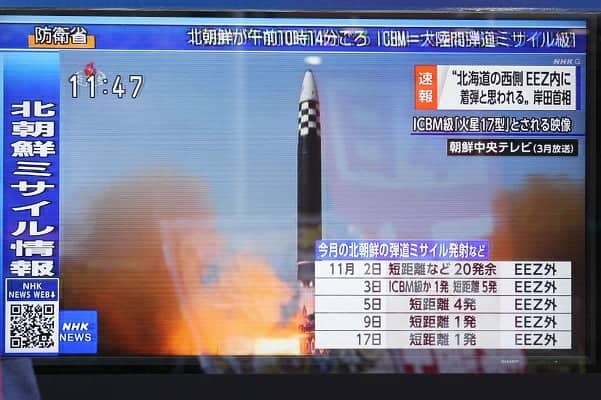 North Korea fired a intercontinental ballistic missile and the joint US-Japan air base issued a “seek cover order” on Friday and Pyongyang claimed that Washington are taking a “gamble it will regret.”

Japan’s coastguard confirmed that launch happened at around 1.20pm GMT time on Friday and the missile is believed to have landed in Japan’s exclusive economic zone (EEZ).

Misawa Air Base said on Friday, “As a precautionary measure the 35th Fighter Wing commander issued a seek cover order,” which was terminated at 1.55am GMT.

The update added, “At this time, there are no additional indications of warnings of an immediate threat to Misawa Air Base.”

Japanese Prime Minister Fumio Kishida said, “We naturally lodged a strong protest against North Korea, which has repeated its provocations with unprecedented frequency.

“We have told (Pyongyang) that we absolutely cannot tolerate such actions.”

In a statement, Tokyo’s Defence Ministry added, “North Korea launched an ICBM-class ballistic missile from near the western coast of the Korean Peninsula at around 10.14am (1.14am GMT) today.”