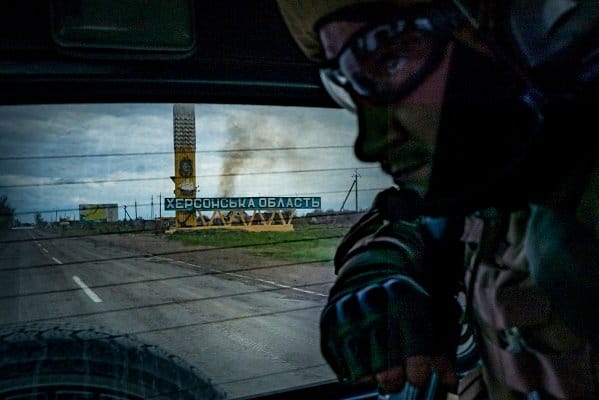 Ukraine’s counteroffensive in the city of Kherson is gathering pace and Russian troops are surrendering “en masse” after they breached the “first line of defence.”

Moscow’s counteroffensive in the Donbas has largely “stalled” as Ukrainian forces are striking fear and mass panic amongst Russian commanders and troops.

Oleksiy Arestovych, a senior adviser to President Volodymyr Zelensky, said that Ukraine’s army have broken though Russian defences in several sectors of the front line.

Arestovych said Ukraine’s counteroffensive was a “planned slow operation to grind the enemy.”

He wrote on his Telegram channel, “We do not fight for show-offs and high-profile phrases as an enemy.

“We fight for a cause. And this thing takes time and effort. Therefore, be patient.

“This process will not be very fast, but will end with the installation of the Ukrainian flag over all the settlements of Ukraine.”

Kherson knows how to Party 💥🔥 pic.twitter.com/XAryTKGg1Q

“Because of this, there is currently a mass escape of Russian commanders in the Kherson direction.

“It is known that the commanders of the ‘famous’ 83rd and 11th Guards Air Assault Brigades, together with their families, are gradually moving to the right bank of the Dnipro to a safer place.”

The Kakhovka operational command said, “The 109th Regiment of the DPR [Donetsk People’s Republic] withdrew from their positions in the Kherson region.

Kherson, Russians on the run. pic.twitter.com/gtV53wryVT

“Russian paratroopers who supported them escaped from the battlefield.”

“He wrote that the Russian military are surrendering en masse.

“The rest are fleeing from Kherson and the region, everyone wants to live.

“The mood is decadent, no one wants to die for Putin.”

A Russian military blogger, going by the name Moscow Calling, wrote, “They report about a small-arms battle, shots from tanks and infantry fighting vehicles.

“This is not just somewhere, but in Kherson itself.”

The Kremlin have denied the reports that Ukraine has breached the front lines in Kherson and said that they have in fact “failed miserably.”

Moscow Calling added, “To believe the reports about the repulse of the counter-offensive is to believe the stories of the night of February 24 – ‘Kyiv is taken by anti-fascists, the air defence of Ukraine is destroyed, Kharkov is ours.’

“After all, the same people write, or rather, the same war rats.

“The real situation will be clear in weeks, if not months.”

“But somehow I don’t care anymore, the Russian Federation lost the war about five months ago.”