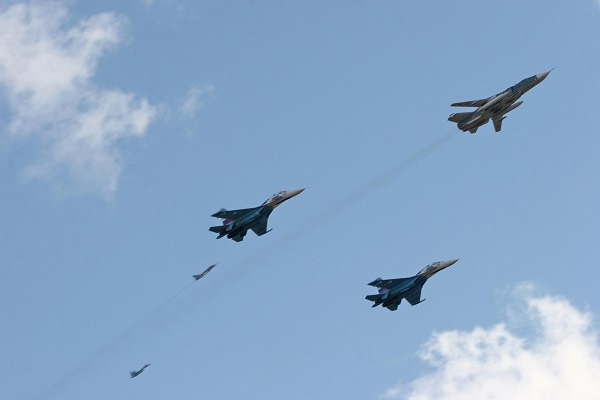 A Russian political analyst who is a close ally of Vladimir Putin has warned that Moscow cannot “exclude the possibility” of some sort of an “event” in “third countries.”

Such military action will be in retaliation for NATO’s support for Ukrainian President Volodymyr Zelensky and his forces.

Viktor Olevich along with other hosts on Russian state TV were discussing the possibility that the Kremlin could be preparing cover actions to kill CIA and Ukrainian intelligence officials.

Military analyst Dimitry Drozdenko said on Russian state TV, “Sudoplatov’s plans were of a broader nature they were extraterritorial.

“At a minimum, we should resurrect or create a specialization, maybe the FSB are already doing that just not in the open.”

Andrey Norkin asked the military analyst, “Regarding the extraterritorial nature of our potential operations do you believe we should be taking measures not only on the Ukrainian territory?”

Political analyst, Olevich responded with, “Diversionary tactics are already taking place on the territory of the Russian Federation, in Moscow, there are already casualties ”

“Therefore I can’t exclude the possibility that we may witness certain events on the territory of third countries, not Ukraine. Definitely,”

Co-host Ivan Trushkin interjected, saying,  “Pardon my fantasy but what if some Pentagon official, who was responsible for handling Ukraine, chokes on a cherry pit?

“Would that help stop subversive activities on our territory?

Olevich replied with, “They most likely won’t stop, but with time, tit-for-tat actions could change the situation.

“I just wouldn’t count on it having an immediate effect.”

Alexander Kazakov piped up and told the panel,  “Within the next two weeks, if five SBU (Security Service of Ukraine) colonels and one CIA colonel were to perish by any means—ran over by a car, fell out of a window, got shot, died in an explosion—in America, Europe or elsewhere, will that change anything in terms of the terror directed at us?

“Nothing… Of course, it would be cool to see the five SBU Colonels die, but how effective would that be?”