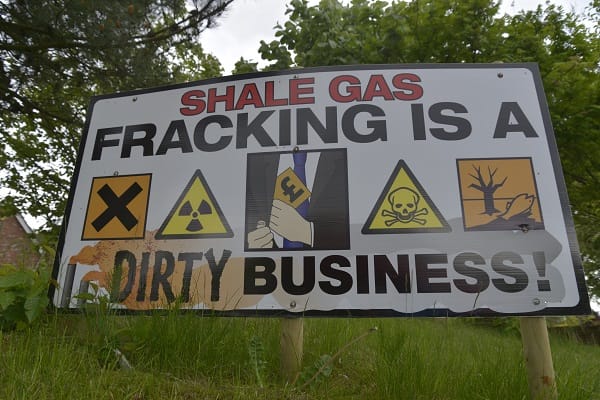 Scientists from Heriot-Watt University have revealed that shale gas extraction was geologically challenged by fault networks at all the drill sites attempted in Lancashire.

Writing in the journal of Petroleum Geoscience, the team recreated 3D images of a 100km2 area of the Fylde Peninsula in Lancashire, using Cuadrilla Resources’ seismic data which was made public in January 2018.

Analysis of the data allowed the Heriot-Watt team to image the subsurface in intricate detail, revealing the complexity of the underlying geology, which is transected by a series of fault lines.

The scientists highlight that one significant fault line they identified appears to have been mis-represented in Cuadrilla’s previously published material.

This is significant, claim the team, because faulting places significant limits on the picking of optimal drill sites as they increase the risk of generating induced seismicity during hydraulic fracturing operations. This major fault line may have contributed to the earthquakes that led to a suspension in such operations at the Preese Hall site in 2011.

If the fault line’s accurate position had been mapped in the first instance, the scientists have speculated that the site would not have been chosen as a candidate for exploratory drilling or hydraulic fracturing.

Professor John Underhill, Professor of Exploration Geoscience, explained, “We believe our research demonstrates the need for detailed, forensic mapping of the subsurface to be carried out as a prerequisite for shale gas exploration, not just in Lancashire, but in any area where shale gas extraction may be attempted.

“This will allow the subsurface geology to be fully understood and the risk of seismic hazard evaluated in advance of drilling. It is clear that there is much more structural complexity and many more faults in the subsurface than evident at the surface.

“The understanding, identification and accurate mapping of faults is vital in any shale resource assessment and when seeking to evaluate the risk of intersecting critically stressed fractures, upon which seismicity might be induced.

“Our structural interpretations suggest that this particular shale gas reserve, known as the Bowland Shale gas play, remains highly challenged with significant uncertainty in its resource estimates, the planning of well site locations, horizontal wellbore pathways and risk of induced seismicity on faults that are seismically resolvable and those that are sub-seismic scale.”

Iain Anderson, a post-graduate student who led the data analysis as part of his PhD project, said: “Due to shale’s low permeability, it is necessary to hydraulically fracture the rock at multiple points along a horizontal well in order to initiate the flow of gas from the shale. Our mapping has demonstrated the severity of seismically resolvable faulting underneath the Fylde region which would limit the locations in which hydraulic fracturing could occur.

“The occurrence, size and dimensions of the compartments between the faults place limits on shale resources, the optimal location of well sites and on horizontal well bore lengths. The accurate mapping of faults prior to drilling and hydraulic fracturing of wells may, in the future, help reduce the risk of fault reactivation and induced seismicity.”

The team go on to caution, in such a structurally complex area as the Ribblesdale fold-and-thrust belt in the Craven Basin in Lancashire, sub-seismic faults which cannot be seen on the data, such as those that led to the earthquakes and successive cessation of drilling in 2018 and 2019, should also be anticipated, and plans drawn up to mitigate for their occurrence and reactivation.

The team’s conclusions support the calls that were made for 3D mapping at extraction sites in the 2012 report commissioned by the UK Government’s Department of Energy & Climate Change (DECC), the precursor of the Oil & Gas Authority (OGA).

Professor Peter Styles, Professor Emeritus at the University of Keele is a global authority on induced seismicity and author of the DECC report.

Professor Styles said, “This is a very significant and impactful paper in the context of UK unconventional gas exploitation. As the authors ably demonstrate, this was an area which had significant geological complexity and that shale gas development would pose extraordinary challenges.

“In fact, despite the ensuing problems of seismicity, the sites in the Lancashire Bowland Basin are probably simpler than many of the other UK PEDLs which mostly lie beneath areas which have had significant coal mining with its associated subsidence and mining-induced earthquakes.

“This paper demonstrates, through robust forensic analysis and interpretation, the issues which geology poses for any future attempts to exploit onshore UK shale resources in a profitable and environmentally (and sociologically) acceptable manner. It should be read carefully and the lessons learned before any future projects are proposed.”

National Grid could start an emergency blackout plan ‘tomorrow’ and...

The pound has hit its highest level since late June, despite concerns about the …