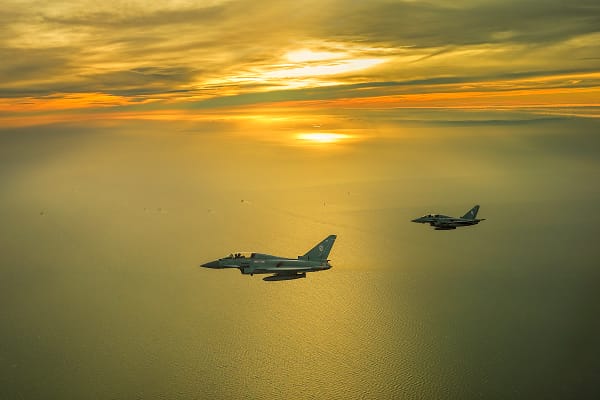 On Tuesday RAF spy planes were in the Black Sea in “international airspace” escorted by “two typhoons” who were picking “up intelligence.”

Professor Michael Clarke, former director-general of the Royal United Services Institute told Sky News, that the RAF surveillance aircraft was “going up and down, doing figures of eight in international airspace.

“But those are the listening aircraft, those are the surveillance aircraft, and what it will have been doing, escorted by two typhoons flying shotgun with it, is just picking up all the intelligence from the battlespace.

“The fact that that’s what the RAF were doing yesterday tells us that the Ministry of Defence here expects there to be developments happening quite quickly.”

There are strong fears that Vladimir Putin could be on the verge of using tactical nuclear weapons in the Black Sea to try and regain some sort of control in a warning shot to NATO and Western allies.

Professor Clarke added, “The Russians are holding a line to the north, holding onto a line from Snirhurivka to Mylove, and that line is obviously under pressure now.

“The city of Kherson in the southwest is also obviously coming under pressure, and so lots of things are taking place. The Russians are meeting, [Defence Secretary] Ben Wallace was in Washington talking to [US secretary of defence] Lloyd Austin.”

Emergency meetings are also being held in Washington DC and the British Defence Minister Ben Wallace urgently left the UK on Tuesday after he was pulled out of the Commons to attend over “shared security concerns.”

On Wednesday afternoon Putin ordered “martial law” on the four annexed regions of Donetsk, Luhansk, Kherson and Zaporizhzhia in the south-east of Ukraine.

Following the convening Security Council which is thought to have taken place in a secret nuclear bunker in a “remote” part of Russia Putin has authorised more wartime controls.

The Russian leader told the Security Council on Wednesday, “We are working on solving very complex, large-scale tasks to ensure a reliable future for Russia, the future of our people.

“We guarantee that this will be done with a guaranteed degree of reliability.”