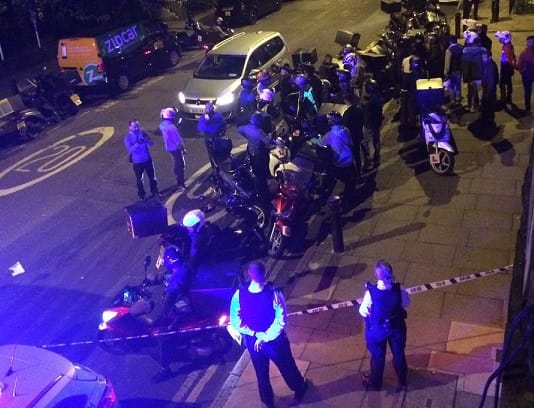 A 31-year-old man was fatally stabbed by moped attackers who also pulled out a gun, a witness said they heard “up to 10 gunshots” as the attackers on the moped demanded the man’s phone.

It has been reported that the victim was approached by the two people on a moped and demanded his phone, the victim thought at first, they were joking until they made their demand.

A witness said to the Independent the man was walking home from a jazz bar with his friends when the moped riders had pulled up and produced a gun to him.

The man was then fatally stabbed and up to 10 gunshots were purported, to have been fired, a witness who wanted to remain anonymous said to the newspaper: “It seemed like they had just been waiting for somebody to walk down the street, and because these people thought that the riders were joking it escalated and somebody died.

“The people that were with him were in so much shock and one of them kept saying they just thought it was a joke.

“The people that I spoke to who were involved in the incident said we were just coming from the jazz cafe round the corner.”

London Ambulance and the police tried to save the man’s life, he succumbed to his wounds and died at the scene.

Detective Inspector, Jo Sidway said: “At this early stage it is understood the victim was approached on King William Walk by two suspects on a moped.

“One suspect is believed to have been in possession of what appeared to be a firearm, the other a knife.

“During an altercation between the suspects and the victim, the victim was stabbed. The suspected firearm was discharged but enquiries continue regarding this.

“The suspects then fled the scene on the moped, and the victim then managed to make his way to a nearby address to ask for help. He was later pronounced dead there.

“I am appealing for any witnesses to any part of the incident, or anyone with any information, to contact our incident room and assist our investigation.”

Thursday evening another incident took place in London as two teenage boys on mopeds attacked five people with acid and it is claimed they stole two bikes. Both are now in police custody.

Any witnesses, or anyone with information or in possession of footage of these incidents should contact police on 101 or tweet @MetCC. To remain anonymous, you can call Crimestoppers on 0800 555 111.