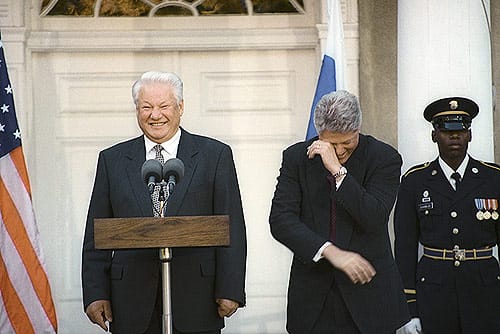 He wrote in a blog post titled “Boris you are wrong” and claims the “fake facts” of the type used by Johnson are killing democracy.

Andriukaitis said, “A functioning democracy demands discussion of us. Using whatever means to win political battles just does not fit the bill.

“Boris Johnson ‘virtuoso’ in democracy is the example of this in action – where priority is given to the objective alone and not the means of obtaining it.

“Can democracy survive this type of politics? My take is that democracy chooses only those principles that derive from it, defend it and legitimize it. The ones that stem from ‘fake’ facts are killing it.”

He went on to compare Johnson of Russia’s Boris Yeltsin, who was a Soviet and Russian politician who served as the first President of the Russian Federation from 1991 to 1999.

He said that during the turbulent years of Yeltsin’s leadership in Russia, the origin of the “Boris you are wrong” phrase used from the blog.

He added, “It is a different Boris, of course, but there was something in the way of doing politics that was similar: many unrealistic promises, ignoring economic rationales and rational decisions.

“I can only wish him luck in ‘taking back control’, spending more money on the NHS, swiftly concluding new trade agreements.

“In other words, I hope and wish that he does not give anyone a reason to use the quote ‘Boris, you are wrong’ against him.”