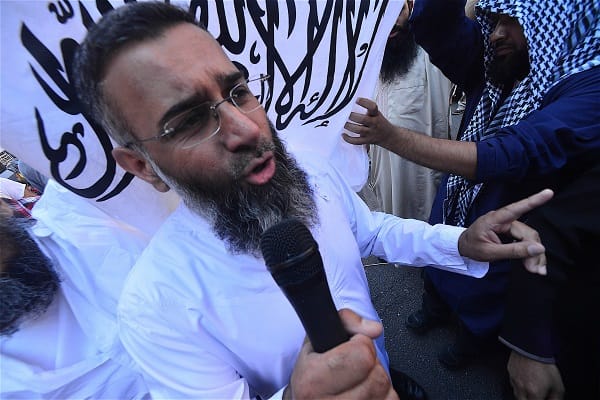 A Tory MP wants “the police and the security services” to move in on an Islamic terrorist who is also an extremist “hate preacher” who is urging Muslims to target British troops in the wake of Prince Harry’s comments.

Anjem Choudary has accused the royal family of having a “dark history of occupying Muslim lands,” which comes after a former royal close protection officer warned that the Taliban have “changed the profile risk” of Prince Harry.

The radical preacher who has been an outspoken supporter of Islamic State in his speeches in the UK was jailed for 5 years and six months in 2016 in the UK.

After many controversial speeches supporting radical Islam he earned the tabloid nickname “the most hated man in Britain” for his support for ISIS.

A high profile security expert warned,  looking the threat and “risk against British assets” which is now “currently substantial, meaning that an attack is likely.”

Harry said, “I didn’t think about those as 25 people. You can’t kill people if you see them as people” and he then described the Taliban as “chess pieces taken off the board, bad guys eliminated before they kill good guys.”

Tory MP Iain Duncan-Smith said, “The police and security services now need to move on this man, and he should no longer be free to act accordingly in the UK.

“Whatever your views on Harry’s comments, the real danger is right there with this hate preacher, trying to whip people up to violent actions.

“These people have no place in a peaceful democracy.”

“The Taliban have already responded and called [Harry] a war criminal… The security services and intelligence analysts will be looking to see whether those statements actually have an influence attached to them.

“Will they influence people to do something against British assets because that’s how it’s looked at.

“You’re looking at a threat and risk against British assets that’s currently substantial, meaning that an attack is likely.

“We go up to severe, meaning it is highly likely so we have we moved now between those two barriers.

“The connotations are quite vast because of what it represents for the United Kingdom.”