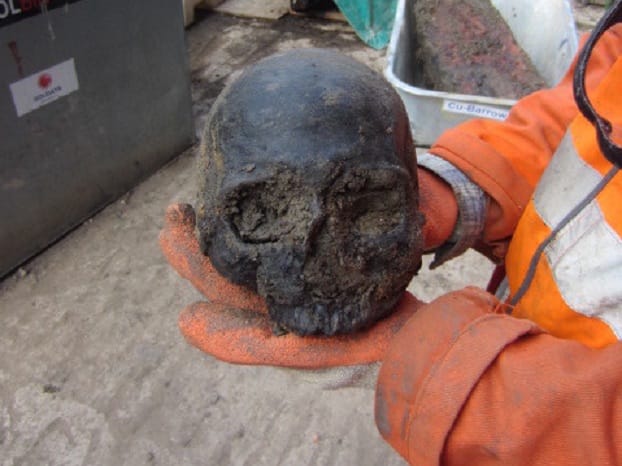 Discovering 20 Roman skulls at a building site? It’s all in a day’s work for Crossrail.

Construction workers have removed human skulls and Roman pottery, found in the sediment of the historic river channel of the River Walbrook.

The skulls were found below the 16th century Bedlam burial ground from where 3,000 skeletons will be removed in archaeological excavations next year.

This is not the first time Roman skulls have been found in London. Over the years, many skulls have been discovered along the River Walbrook leading to speculation that Queen Boudicca’s rebels decapitated heads during the rebellion against Roman occupation in the 1st Century AD.

“This is an unexpected and fascinating discovery that reveals another piece in the jigsaw of London’s history.

“This isn’t the first time that skulls have been found in the bed of the River Walbrook and many early historians suggested these people were killed during the Boudicca rebellion against the Romans.

“We now think the skulls are possibly from a known Roman burial ground about 50 metres up river from our Liverpool Street station worksite. Their location in the Roman layer indicates they were possibly washed down river during the Roman period.”

What Crossrail archaeologists have discovered under London