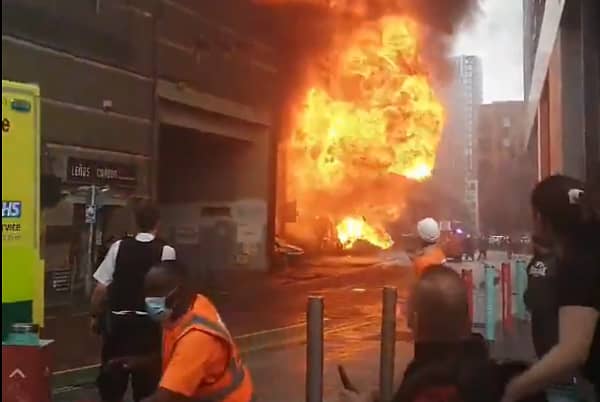 On Monday afternoon a hug fireball ripped through Elephant & Castle station and smoke could be seen for miles pouring from the reailway arches.

There are more than 70 firefighters at the scene which was first reported to London Fire Brigade (LFB) at 1:43pm with reports that four cars had caught on fire.

Praying that nobody was injured in the explosion at Elephant & Castle.

The fire service is advising everyone to avoid the area whilst they deal with the incident – @LondonFire @fbunationalpic.twitter.com/4Q0dIJqKdQ

“Three commercial units underneath the railway arches are completely alight and four cars and a telephone box are also alight near #ElephantandCastle Railway Station.

Smoke still pouring out, the area under the station is called Little Columbia and there are numerous small Colombian shops and eateries which are now covered in thick black smoke. Ambulances and fire fighting crew in attendance pic.twitter.com/4yTxTA7PZK

“Road closures are in place and people are advised to avoid the area and keep windows and doors closed.”

The Mayor of London, Sadiq Khan, said, “My thoughts are with all those affected by the very serious fire in Elephant and Castle. I am in close contact with the Fire Commissioner.

“I want to thank our brave emergency services – the London Fire Brigade, Met Police, London Ambulance Service and British Transport Police, who acted quickly to ensure both residents and passengers at the nearby station were safely evacuated.

“The fire is now under control. Two people, one police officer and one member of the public are being treated for smoke inhalation. I wish them and others affected a speedy recovery.

“I urge the public to avoid the area whilst our firefighters and emergency services continue their work in the area. There are significant road closures in place and the tube station is shut.

“If you live nearby, please follow the advice from London Fire Brigade and close all doors and windows.”