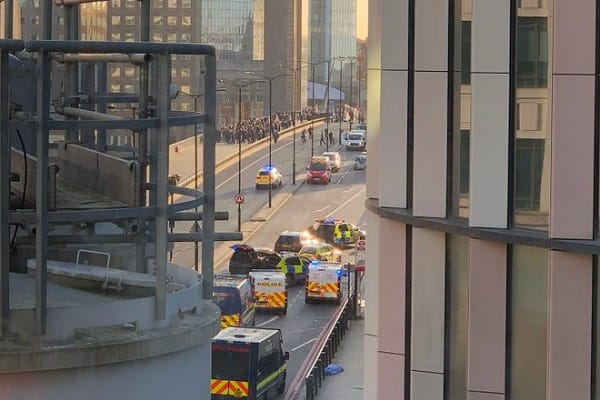 Gun shots have been fired on London Bridge police say

The Metropolitan Police are dealing with a serious incident that has taken place on London Bridge Friday afternoon.

Police have shot a man on London Bridge, according to witnesses, it is believed that a person started attacking people with a knife on the bridge or a fight had broke out.

Witnesses said they heard gun shots being fired including a BBC reporter, the area is in lockdown and offices have been evacuated.

BBC reporter John McManus said he saw a group of men fighting on London Bridge. He told BBC News, “Just a few minutes ago I was walking across London Bridge on the south bank to the north bank of the bridge.

“There appeared to be a fight going on, on the other side of the bridge, with several men attacking one man.

“Police then quickly arrived, including armed police, and then a number of shots were fired at this man.”

.@myldn reporter @CharliellJones is at London Bridge right now. His video shows armed officers moving towards the area before they tell everyone to 'get inside' #LondonBridge pic.twitter.com/lQSr1oGGxP

McManus added, “Police have now cleared the bridge, everybody has been told to move back and now on the northern side of the bridge, but there are more shots going on,” he added.

“I can’t see what’s happening now because we’ve been moved out of the way but there are shots going on, and you probably hear the police sounds as well.

“Everybody has cleared the area, the entire bridge has been moved, and right on the northern part of the bridge, right up until quite near the Bank of England, is being cleared.”

London Ambulance Service have now declared this “a major incident”

We have now declared a major incident and have a number of crews at the scene in London Bridge.

We will share more information as soon as we have it. https://t.co/ICwDVAgidE

A Met Police spokesman said, “Police were called at 1.58pm to a stabbing at premises near to London Bridge. Emergency services attended, including officers from the Met and City of London Police.

“A man has been detained by police. We believe a number of people have been injured.”

The Mayor of London, Sadiq Khan said, “The Metropolitan Police have confirmed that as a precaution the horrendous incident at London Bridge is being treated as though it is terrorism-related.

“I remain in close contact with the Metropolitan Police and am being kept updated with events. It has been confirmed that people were injured in the attack. My heart goes out to them, their families and all affected.

“Thank you to our brave emergency services who responded to today’s horrific attack. Every day they put their lives on the line for us – running towards danger in order to keep London safe.

“We must – and we will – stay resolute in our determination to stand strong and united in the face of terror. Those who seek to attack us and divide us will never succeed.

“The London Bridge area remains closed – please avoid the area at this time and follow Met Police for further updates, and TfL for travel updates. If you are near the incident, please follow the directions of any officers on the ground.”